And now I’ve accidentally summarized the post in an alliterated sentence.

I guess you can all go home.

Stereotypes are overgeneralized ideas, and they are serious enough that if you google “narrative stereotypes” you get academic articles in the top ten. That’s like where Smart Google lives.

I’ve posted about stereotypes here and in the M and W posts in the A-Z series, but we’ll add some more meat. Simply put, stereotypes force characters and settings into boxes and we write how they are “supposed” to be. That’s bad because no real person fits into a box and writing them that way limits their growth. 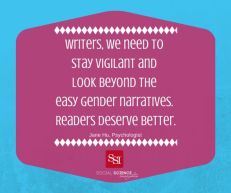 It can happen when a character is part of any group – gender, race, religion, or sexual orientation, for example. If I asked ten people to describe the stereotypical woman, their details may have some overlap, but if I asked for the stereotypical religious woman, I’m willing to bet the details would be more similar.

It starts with logical commonalities in the group as represented in that culture. The religious woman details would look different in America than in Egypt or Argentina. It’s not bad to start with such details. The problem is when the character isn’t allowed to leave the box, where she can quickly become a cliche.

The trick to avoiding stereotype is to (and forgive this cliche) think outside the box. Maybe our American religious woman has hot pink hair. Or maybe she doesn’t like children. Or maybe she’s a lesbian. The details that are outside the stereotype are much more numerous than those inside it, so avoiding stereotype works for the writer on more than one level – you get unique and original characters, and the overall story is more interesting because of that.

There’s a quote that I can’t find now (feel free to share in the comments if you know what I’m talking about), but it basically says writers have to think about their stories long enough to get past the stereotypes. Our initial ideas will spring from our experiences, which automatically lean towards stereotype. But the more you get to know your story, characters, and setting, the more likely you are to steer away from it.

What stories do you know that go against stereotypes – or to go the other way, which lean on them too much?

8 thoughts on “Story Stuff: S Is For Stereotypes”