I get together with a group of friends to play Bingo every couple of months. We affectionately call each other the “Bing-Hos”. I know, we’re so funny. In the time we’ve been playing, I’ve identified a few groups that work together as if part of their own ecosystem.

Group 1: The Bing-Hos – That’s us, 30- and 40-something moms just getting together for a laugh and maybe to win a little money.
Group 2: The Blue Hairs – These are the hard-core Bingo attendees. They play at least 10 packs AND have one of those machines with 20 more packs on it. They have approximately 48 daubers in various neon colors. If Troll Dolls were still popular, there would be 20 of them to bless the Bingo packs. Think Mimi on the old “Drew Carrey Show”.
Group 3: The Family-Nighters – Family night at the Bingo hall? Believe it! These are the folks who have their older kids daubing a pack for them and their younger kids lovingly stashed under the table.
Group 4: The Workers – On the night we go to Bingo, The Workers are lovely older gentlemen raising money for a group that supports kids in the community in some way. They make the Bing-Hos and the Family Nighters feel better about spending money on Bingo because it’s “for the kids”.
Allow me to set the scene: 15 minutes before the game, and the lobby and concession areas are teeming. The Blue Hairs are selecting their machines, and the Bing-Hos are waiting for their friends to arrive before getting in line to buy packs. The Family-Nighters are buying candy for their little kids to eat under the table. The Workers are selling packs and extra pull tickets (more on these later) at a feverish pace. Excitement is in the air. Could this be my night to finally win? 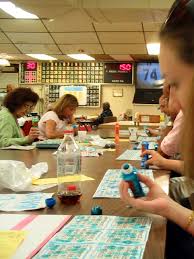 As game time approaches, everyone gets settled. The Bing-Hos are telling stories and sharing jokes. The Blue Hairs are giving them the “stink-eye” already, afraid that they will be noisy. They switch dauber colors for good luck. The Family-Nighters have to take the baby outside because it is crying. Then, the main Worker (the announcer) lays down the rules. This includes keeping voices down during the games. The Blue Hairs give the stink-eye to the Bing-Hos again.
As this is going on, other Workers are selling pull-ticket games called “Blazing Balls”. I wish I was making that up. These are a way to win extra money during the games. The main Worker asks throughout the night if everyone has their “Blazing Balls”. The Bing-Hos and the Family-Nighters snicker every time. My friend says, “You know, they make a cream for that!” More snickering ensues, more stink-eye from the Blue Hairs.
The game begins, and quiet envelops the room. Well, mostly. The main Worker has to clear his throat after every number. I wonder if he needs a bottle of water. A Bing-Ho makes a joke about having a “juicy dauber”, followed by quiet snickers. A Blue Hair wants to throw her rabbit’s foot at them. The Family-Nighter little kids are coloring under the table as if this is their natural habitat.
As the games go on, some Blue Hairs win, some Family-Nighers win, and my friend wins a Blazing Balls ticket game. I never win. But that’s okay, because it’s “for the children”, remember? At the end of the night, the winning Blue Hairs are chatting it up with the Workers, while the losing ones drag their feet out the door. The Family-Nighters are cleaning the spills their kids made under the table. And the Bing-Hos? They’re counting the number of times they were shushed, still joking about juicy daubers, and looking forward to their next Bingo experience.