Think about a fiction book you’re reading. Tell me: what do you think about the main character? And how much information about that person did you have before forming that opinion? What qualities did you use? Gender? Age? Race? Appearance?

Stereotyping occurs when we make assumptions about people based on the groups to which they belong. We do this all the time. 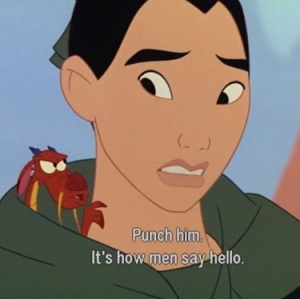 Imagine pulling behind an old Cadillac at a red light. The person driving the car has a ball of silver curls for hair and hands tightly gripping the wheel at 11 and 1. The light is about to change. What are you expecting from this driver?

Just by the visual input, based on past experience – and let’s be honest, pop culture – we expect Grandma to creep into the intersection and drive down the street at least 20 MPH under the speed limit. Right? You want to change lanes as soon as possible to pass her.

But what if Grandma squealed her tires as her engine roared, breaking noise ordinances because she just installed a sweet four-inch muffler? Would you be surprised?

Grandma just broke stereotype, and as a result, she just became a lot more interesting.

On the surface, stereotypes aren’t necessarily bad, but they can be boring. If taken to extremes, they can lead to cliche or prejudice, but they can give us a starting point to understand people, both real and fictional.

Now, give married guy the behaviors of first date guy. How does that change your opinion of married guy?

So when writing characters, it’s okay to start with stereotype, because readers start there too. But unless you want them taking Grandma’s souped-up Cadillac to Dullsville, for the love of all things holy, don’t let them remain easily stereotyped. Writing an angsty, seemingly spoiled teenager? Make her homeless. Is your guy a big biker dude who’s covered with tats? Make him a brain surgeon. Turn stereotype on its ear.

Question time: In what ways do your favorite characters, or the characters you’re writing, break stereotype?

I’ll answer my own question with this: in my mystery novel, one of my characters is a guitar playing, dread-sporting 22-year-old guy. He makes money by working in IT. A couple critique-ers just couldn’t get over that. “He wouldn’t work in IT!” they said. “He’d smoke a joint!”

I laughed. And then I told my character he was still working in IT.

11 thoughts on “Do You Stereotype Your Characters?”