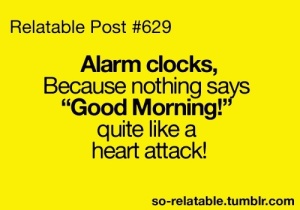 Today is the last official day of my spring break, meaning that I’ll once again be employing the services of my alarm clock. My clock isn’t anything fancy. It’s just one of those standard glowing-red-number devices that plays the radio or an obnoxious buzzer at wake-up time. Like all people, sometimes I oversleep my alarm, but my kids usually make sure I’m awake early enough to not be late for work. This problem was much worse when I was younger and more sleep-deprived.
I’ve seen some other types of alarm clocks that strive to prevent the problem of oversleeping. I believe I saw one in the Sky Mall magazine that they put in airplanes. It had wheels. So when the alarm went off, it would roll off your nightstand, and you would have to catch it before you could turn it off. I think if I was using this device, it would only go off once. After that, the neighborhood foxes would be scavenging the pieces from my backyard.

I saw another novelty alarm clock in a different catalog. It had a small jigsaw puzzle on the top of it.  When the alarm sounds, the pieces fly off the clock, and you have to put the puzzle together before the alarm will stop. I can’t think of a more irritating way to begin my day, except maybe for when my toddler barfed on me while I was sound asleep. I wonder if the roller-clock people and the puzzle clock people have ever considered joining forces. Teenagers would never sleep in again. Unless, of course, they leave the pieces of their clocks in the yard for fox scavenging.
I thought I was being so clever and realizing a new idea for an alarm clock that would be both pleasant and effective and waking someone up. Then I Googled my idea and found out it already exists. Oh well. Anyway, meet the alarm clock that releases scent packets.

This clock releases chosen scents at specified times. So if you want to wake up to the scent of baking bread, you select that packet and the time you want it to “go off”. This begs the question: What scent would you want to wake up to? For me, I think brewing coffee or frying bacon have the best chance of stirring me, but for actually getting me out of bed it might have to be something unpleasant, like pickles or cat pee. Ah, cat pee. What a way to start the day.

What scents would you want to wake up to? Leave your answers in the comments!

One thought on “Don’t Be Alarmed, This Is Just Your Clock”