I’m writing this from a hotel room. The last hotel room in an unexpected ten-day adventure, in fact.

Tomorrow, we’ll be home. Back to our non-humid, cat-filled normal lives.

We were supposed to be home last Friday.

Flashback to two Fridays ago. My family and I are waiting in our local airport for our flight to Washington D.C. to board. The first delay came just after we arrived.

The second came about an hour later.

The third, a couple of hours after that. I forget now.

My son kept frustration at bay by cuddling his puppy.

There was no fourth delay, because instead, our flight was cancelled.

It’s not the first time it has happened to us, so we figured we’d catch a later flight. Or a different airline.

The next flight was twenty-four hours later – IF that flight wasn’t also delayed and cancelled.

That would pretty much guarantee at least one missed night in the condo I booked eight months ago.

So we decided to take matters into our own hands: after ensuring a refund from the airline, we hit the road. 1,600 miles and 24 hours to D.C. We declared the trip No More Airplanes, in honor of one of my favorite movies, Almost Famous.

The drive straight through was tough, but we vowed to make the best of it. For me, that was journaling the experience for blogging purposes. There’s one lesson for each state we drove through, starting with our point of origin, Colorado.

Lessons from the states:

Colorado: Beautiful but they need to get their airline shit together.

Kansas: It’s flat and surprisingly humid, but at least there are huge cockroaches.

Missouri: Once you’re there, they don’t want you to leave. Restaurants and red lights are slow. Speed limits are obviously enforced.

This was our 5 AM visit to Waffle House in Kansas City.

To be fair, we let it keep us a while longer on the way back when we visited the Gateway Arch.

Illinois: According to a big sign, Illinois Dream Homes are trailers.

Indiana: I think I slept through it.

Kentucky (on the way back): It’s raining.

Ohio: The people are super friendly. At least the people at Cracker Barrel were friendly.

West Virginia: I had no idea the state was so thick with trees.

Maryland: It was dark again by the time we got here but it’s next door to D.C., so that’s a big plus in my book.

Virgina: It was probably a bad idea to visit in July. Thank God for on-site laundry at the condo resort. 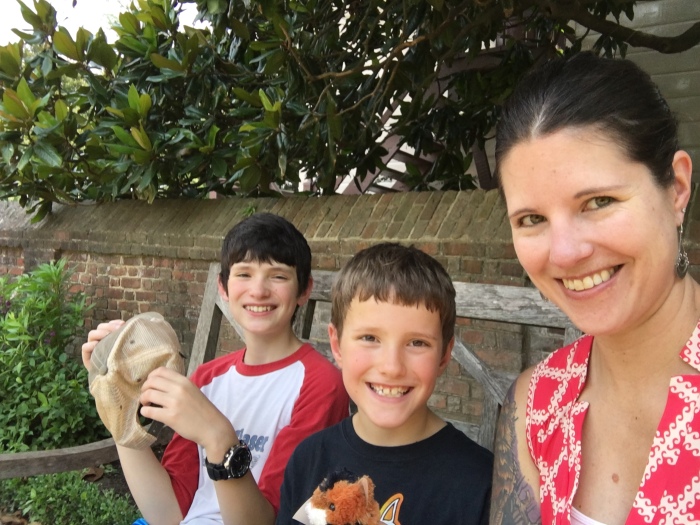 We did our best not to melt.

We opted to NOT drive the whole way back in one shot, hence the three-day delay in getting home. My Groupon app got a lot of use booking hotels and finding food. It won my eternal respect the last night (the night I’m writing this), because the deal I found brought us here: 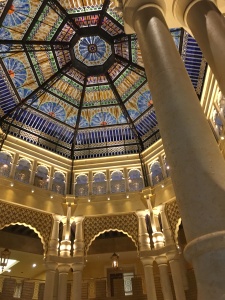 That’s the atrium to the hotel. The shower had a fixture in the ceiling and in the wall. The kids’ minds were blown by all the awesomeness.

Considering that the night before we stayed in a place I was pretty sure would be the site of our murders, this was a step up. And with the deal, the two places cost about the same.

So what’s the big take-away here?

It seems fitting that a tour of half the country would surround our visit to D.C. We saw the purple mountains and the amber waves of grain, along with fog-hugged treetops, dozens of rivers, and the world’s biggest wind chime. We saw the body of our country in addition to the heart.

Also, we learned the importance of being flexible and of the Groupon app.

10 thoughts on “Lessons From An Unplanned Road Trip”