This post has something for everyone. If you’ve been to the Big Island of Hawaii, you’ll relate to it. If you plan to go, you’ll get a little advice. If you’re scared of the ocean and won’t leave your landlocked haven (or if you just don’t have the desire or means to go), you’ll get a laugh from my experience. At least that’s my hope.

I’ve broken my lessons down by day, mostly so I can keep them straight. However, if you’re planning a trip sometime in the future, this will also work as a travel guide. Because what we’ve done has rocked so far (except for Day Zero. I don’t recommend that.)

Day Zero – Wednesday – Now I know where whoever wrote The Terminal got the idea.

1. You get Day Zero when the airline you paid to fly you to Hawaii can’t get the job done.

2. U.S. Airways can kiss my butt. (Their response to my strongly worded letter will determine if this lesson gets to stay here.)

3. Being stuck in an airport sucks big time, but you can make it suck less by meeting interesting people.

4. The airport probably has a wine bar. The wine will be overpriced but you won’t care because you’re stuck in the effing airport.

5. It’s dark behind the rows of uncomfortable chairs in the waiting area by the gate. Good for the kids to catch some sleep.

6. It’s also dirty back there, so try not to think about it. They’re kids. Remind yourself that the youngest replaced a wad of gum into his mouth after he let it fall on the floor at Sports Authority.

7. After the flight you were rescheduled to take is delayed, you’ll seriously consider sneaking on the next flight you see. (Reykjavik? Sure! Why the hell not??)

8. Sneaking on another flight is frowned upon (by airline personnel, the TSA, your family, blah blah blah).

10. After being in airports for the last twenty-four hours, you’ll smell and look like death. You won’t care because Hawaii smells like flowers.

11. Landing in Kona = landing in an old lava field. It looks like the surface of a different planet. You’ll remember that one Big Bang Theory where they were stuck in the desert wearing Star Trek uniforms.

12. But worry not! Palm trees and all sorts of tropicalness appear before long.

13. Grocery prices are not a joke. Because Hawaii!

16. The kids will want to swim at the resort pool ASAP.

17. They’ll also want to go to the beach. You’ll take them because they’re already dressed for the occasion.

18. There are beach parks in various places. Hapuna is awesome.

19. Some bathing suits were not designed for boogie boarding/wave riding. Make sure everything stayed contained before surfacing.

20. I mean it. Because stuff doesn’t stay contained.

22. Seriously, everywhere. In places sand should never be.

24. Sunscreen works when used as directed.

25. Get some aloe for when you don’t use it as directed. Because sand in sunscreen is gross.

26. Gramma’s Kitchen in Honokaa is a great place for your Hobbit children to have second breakfast.

27. The Waipi’o overlook will remind you of Jurassic Park (which was filmed on Kauai, but still).

28. You can hike among waterfalls at Akaka Falls. Plus, Akaka is fun to say when there are young boys in the car.

29. If you go to Hilo on a Saturday, there’s a huge farmer’s market. The food is impressive (avocados as big as grapefruit, for example) and there are souvenirs.

30. There’s a guy at the farmer’s market who really wants to sell you a vegetable peeler.

31. There’s a big cafe near the farmer’s market. I don’t remember the name but if you ask for the code to the restroom they’ll mix up the numbers.

32. If you didn’t bring a charger and have been using the maps app a lot, your phone will be dead by now. There’s a Radio Shack inside the mall.

33. If you have an iPhone, it helps to get the right damn charger. Or you’ll have to go back and Isaac will know exactly why.

34. Rainbow Falls is a neat waterfall, but there are some seriously awesome Banyan trees there. The area looks like Mother Goose should be telling stories. And the trees are fun to climb.

35. Boiling Pots is near there. It’s interesting but hard to find. We wouldn’t have found it if not for the help of a friendly local. It’s on Peepee Falls Road (another fun one to say with boys in the car).

36. On your way back to Kona, try to visit the space observatory on Mauna Kea. It was cloudy and quite cold when we tried, but you might have better luck.

37. The weather on this island is wonky. Prepare for any occasion and leave layers in the trunk, just in case.

38. There are free coffee farm tours at Greenwell Farms. They also let you sample their Kona coffee, which is their specialty. An older lady who works there will keep your kids busy by sending them on a chameleon hunt in the trees. There may or may not be any actual chameleons.

39. Na’alehu is the southernmost town in the U.S. and they are proud of that. Southernmost bar. Southernmost bakery. Southernmost homeless guy. The bakery has amazing goodies and the gift shop has some different things. The bar/grill will try to rip you off so check the math before paying the bill. 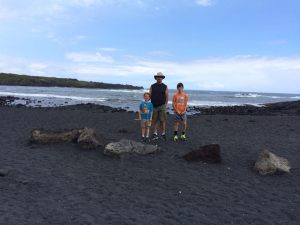 40. Punalu’u offers the Black Sand Beach, and it’s exactly how it sounds. Surreal and worth seeing.

41. Finally, Volcanoes! Remember the layers you left in the trunk? You’ll be glad you have them now.

42. Seeing lava is possible but not likely (at least when we were there). The caldera is humongous.

43. It’s nice to have a free day after two days of driving all over.

44. Luaus are seriously freaking expensive but worth it for four reasons: 1. They’re right next to the ocean. 2. They’re all you can eat. 3. Open bar. 4. Live entertainment. And you’re expected to take pictures of the attractive Hawaiian dancers (of both genders). I made sure to do my part.

45. Did I mention the Luau has an open bar? I asked for a red wine and the bartender asked if I wanted two. Uh, yeah. Gimme.

46. Renting a beach umbrella is worth it. Also, napping on the beach is awesome.

47. You can drive to the end of the road on the north side of the national park and walk around on a fairly new lava field. It leads to a surprise black sand beach.

48. The road itself is interesting – hilly and encased in a few tree tunnels.

49. There’s a little community of local merchants at the end of the road. You can get shirts, smoothies, and I’m pretty sure, drugs. I didn’t specifically ask about the last one.

I’m writing this on the morning of the last day, so here’s where I’ll put lessons not connected to a specific day.

50. Much of the plant life looks like Dr. Seuss’ inspiration. 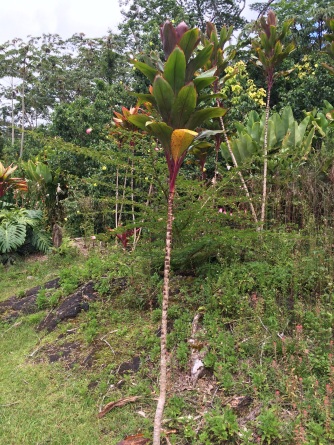 51. People really get into jogging. I suspect tourists who haven’t jogged once in their lives see all the joggers and give it a try. I am not one of these. The only thing that would get me running is if a meth-crazed clown was chasing me.

52. There are no meth-crazed clowns here.

53. Plumerias just fall off the trees and they smell amazing.

54. On the day you’re supposed to go home, you’ll consider hiding somewhere until everyone forgets you exist so you can stay.

So there’s my 54 cents. If you’ve visited, what did I miss? Feel free to add your own lessons in the comments.