Earlier this week, when I published the unexpected road trip post, I said I would complete the vacation adventure tale by giving D.C. its own blog space. Seeing as I will forget what I wanted to say if I wait much longer, the time has come for that post! 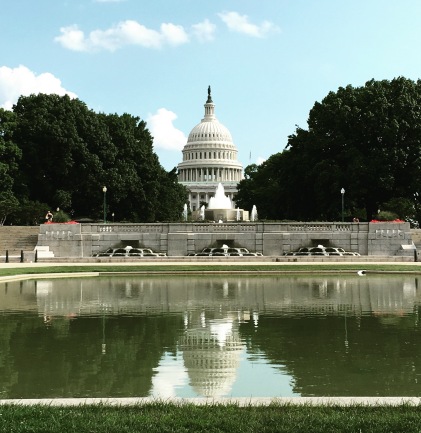 Consider this a humorous travel guide, like those I wrote for Hawaii and Disney World. All of the pictures are mine, in that I took them with my trusty phone (which I’m sure you would have discerned by their epic photographic brilliance).

And now, without further bantering, I bring you the list of lessons from our nation’s capital.

2. The Metro is a lifesaver. Driving and parking in the city would have been a nightmare (and every local we talked to laughed at the idea of driving in town).

Chilling on the Metro

3. Humidity is not a myth. Our home is in a famously dry place, so it was no surprise when my son asked why the air was “thick.”

4. There is a LOT of walking involved. I try to exercise regularly and I was sore after a few days – just from walking.

5. The Smithsonian museums are free! I know this is common knowledge for a lot of you but it was a very pleasant surprise for us. 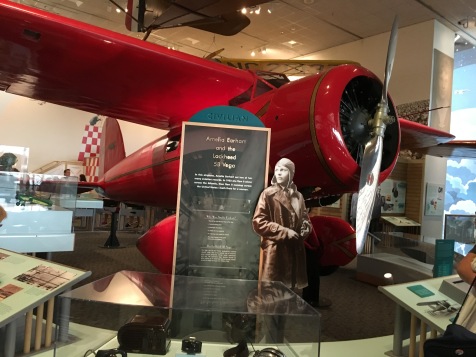 6. The Air and Space Museum is the most popular one for a reason. That reason is not the ginormous McDonald’s that occupies the food court. 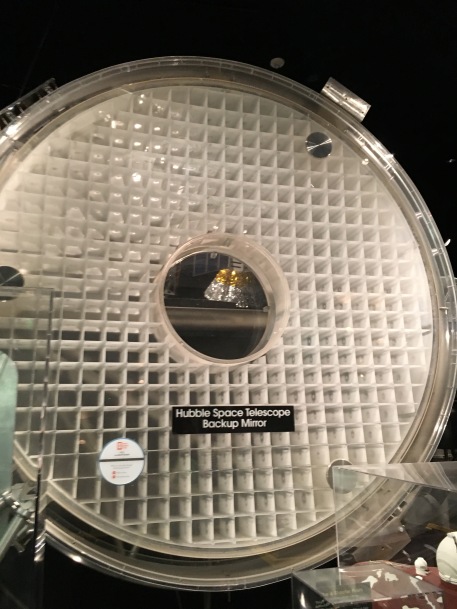 7. At the American History Museum, you can see relics from your childhood preserved behind glass. And it doesn’t make you feel old at all.

“Mommy, look at this OLD computer!” 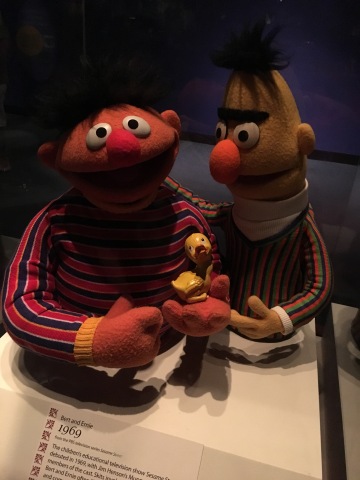 9. . . . and later, you’ll be amused at Bert and Ernie’s proximity to the next picture in your phone (it was in the neighboring case). 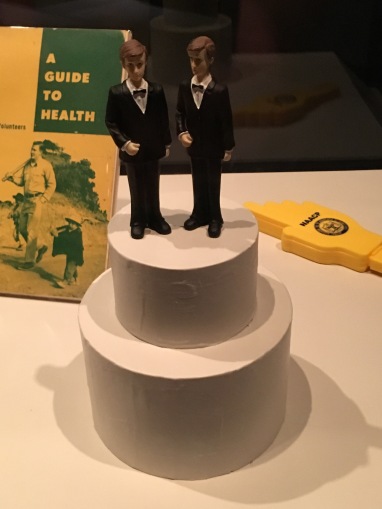 10. One of the coolest things in the History Museum is something George Washington himself owned and used.

11. And there are bits of history that fill you with an odd sense of pride, even if you personally had nothing to do with the event.

This is a suffragette’s wagon.

12. The Natural Science Museum is HUGE. We didn’t have much time so we only saw a few exhibits, but one of them held the Hope Diamond. 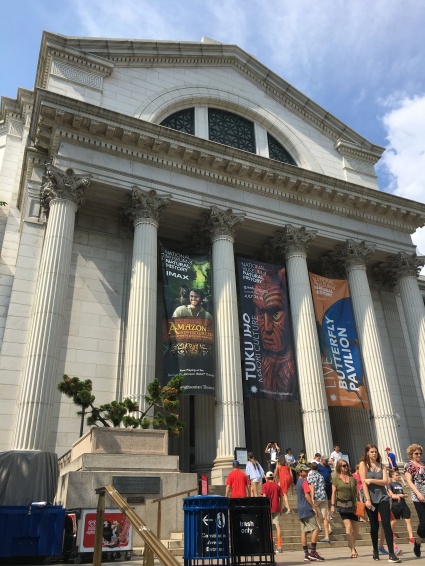 13. If you’re an owl enthusiast like me, you’ll enjoy the owl display. I forced my family to stop walking so I could take pictures. Because owls. 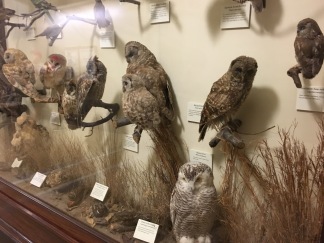 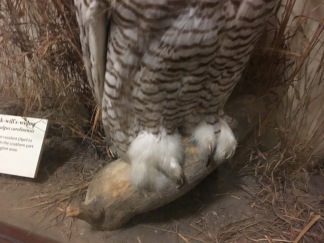 14. I didn’t take pictures in the Holocaust Museum because it felt disrespectful, but it made a lasting impact on us anyway. There’s an exhibit that “followed” a Jewish child from his home to the ghetto to the concentration camp that’s especially poignant.

15. A totally worth-it expense is an evening/night tour of the monuments. They put you on the top of a double-decker bus and narrate your way through the city.

Viewing the Jefferson Memorial from a distance.

And up close (or zoomed in, rather)

16. A hidden gem is the FDR Memorial. It’s spread over four “rooms” in a park, designed to be accessible to those in wheelchairs. Each room has a water feature that means something different (like the chaotic falls representing the chaos of World War II).

17. There are quotes engraved on things everywhere.

This was at the FDR Memorial.

18. The MLK Memorial best encompasses the meaning of unfinished statues (which were fairly common). Because he was assassinated, his work was unfinished. Surrounding the statue are quotes by Martin Luther King Jr. that were not as famous as his “I Have a Dream” speech but were just as important. 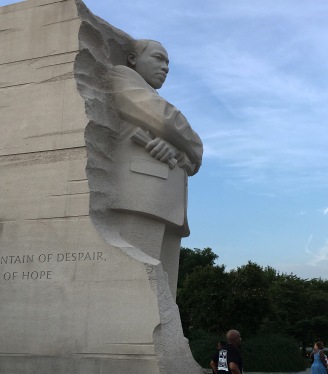 19. The Lincoln Memorial is much more crowded than movies have led me to believe.

See all the people?? 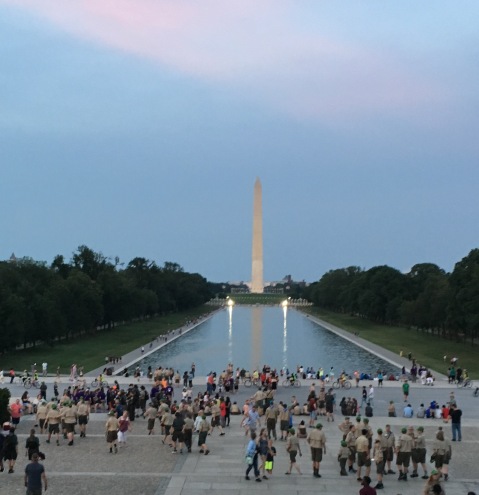 It was a very people-y place.

Another statue that was bigger than I expected.

20. The Iwo Jima Memorial is more poignant at sunset somehow.

21. After sunset, we saw the landmarks in, uh, new light, including the White House, the Jefferson Memorial, the Washington Monument, and the WWII Memorial. 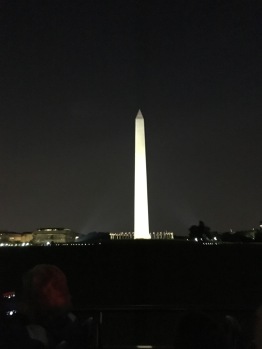 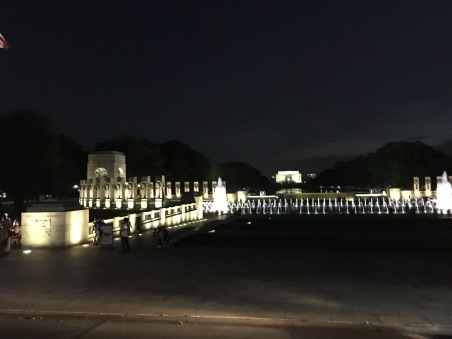 22. Another worth-it excursion is a tour of the Capitol Building. I planned to do this because it’s a setting in my next book (you know – research), but there’s a lot more to it than I realized. 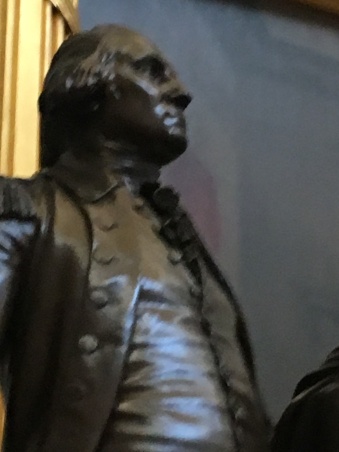 25. The rooms themselves have special meanings and history.

I forget what this room is called but it’s circular and where they put presidents’ coffins before their funerals.

The ceiling of that room.

26. A thirty-minute Metro ride from the Capitol Building will take you to Old Town Alexandria.

It’s a pleasant walk through Alexandria.

This is the most “Virginia” pic I captured.

27. At the end of the street is the Potomac River, where street performers hang out. One is an escape artist guy who attracts a big crowd but doesn’t seem to know what he’s doing. We got bored and left before we could find out if he escaped his chains. But the guy playing the xylophone was awesome.

The final three points are either random or surprising and didn’t really fit anywhere else, so they get to be at the end.

28. The best place in the city to eat lunch is the cafeteria inside the US Department of Agriculture building.

29. The walk from the Air and Space Museum to Union Station is only a mile but it feels like more because of the heat.

30. Next time, we’ll plan more than a week to visit. We saw a small fraction of everything D.C. has to offer. We can pretty much make it a new vacation (except for the riding the Metro part. We have that down).

Do you have your own D.C. lessons? Share in the comments!

4 thoughts on “30 Lessons From Washington D.C.”