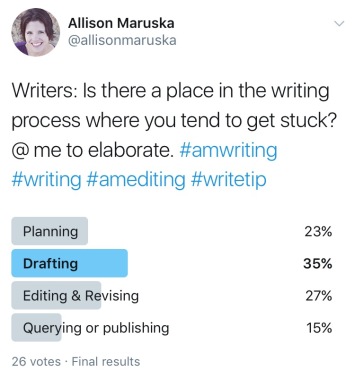 My idea was to take the “winning” category and blog about it. You can see Drafting came out ahead, but you can also see the number of votes was rather low. So while it looks like Drafting came out significantly ahead, it’s probably only one or two votes up from Editing.

So since each category is a sticky point for at least a few writers, the poll is now the launching point of a blog series! There will be a post for each category, in addition to a Super Secret Fifth Category That I Should Have Put Into The Poll But Didn’t.

Whew. That was a lot of caps.

Now, without further ado, let’s get to the first post!

Where Writers Get Stuck: Planning

A subgroup of writers (myself included) proclaim they are pantsers, meaning they write by the seat of their pants with little planning beforehand. But even pantsters have to do some planning. In fact, it would be more accurate to call ourselves plantsers.

Planning is taking an initial idea and developing it into a cohesive premise that makes a story. Plot points, conflict, and characters have to be decided. You pretty much have to know the beginning, middle, and end of a story before the draft starts. The difference between planners and plantsers is how many smaller details are decided beforehand.

So why do writers get stuck here? Based on my own experience and talking with other writers, I see two primary culprits:

A dog goes to space is an idea. For it to become a story, there have to be complications to overcome and a mission for the dog to achieve. As you ask questions, a story develops – why is the dog going to space? What is getting in the way? What happens if he doesn’t go to space? (Click here for more info about using questions to develop ideas).

Sometimes (more often than not, I’d say) the idea isn’t very good and wouldn’t make a very good story, so the plan stalls. And that’s not necessarily a bad thing! It allows us to focus our energy on the good plans and good stories. When writers get stuck in the planning stage, it could be because they’re gripping too tightly to an idea that isn’t so great.

The solution: Move on to a different idea and see if planning goes more smoothly.

Culprit 2: Implausibilities have crept into the plan.

Sometimes, planning is going great and then screeches to a halt at a specific point. This happened when I was plantsing The Fourth Descendant – I wrote a plot point that got my characters stuck in a corner and I couldn’t get them out. The problem was the plot point “took the story off the rails,” as a writing partner described it. The point was implausible and left no room for my characters to work.

The solution: Step back and talk it out. Discuss your problem plot point with a partner who isn’t so close to the project. They’ll likely see the implausibility that you can’t, and you can change the point to something that works.

What about you? If you’ve gotten stuck during planning or plantsing, what was the problem, and how did you solve it?

14 thoughts on “Where Writers Get Stuck: Planning”