Welcome to Part 4 of our blogging mini-series on where writers get stuck, which launched after I ran this poll on Twitter. 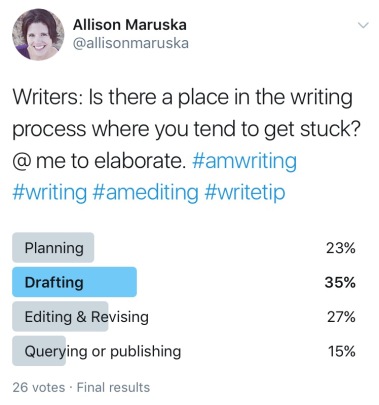 The results were close enough that I decided to spend time on each one, in addition to a Super Secret Place Writers Get Stuck That’s So Super Secret I Didn’t Put It On The Poll.

Be sure to check out Part 1, Part 2, and Part 3 for the other sticky places. Today, we’re talking about querying and publishing.

These are two separate yet combined steps because they represent to two primary paths to getting our work into the market where readers can buy them. Traditional authors start by querying agents and/or editors at publishing houses, and self-published authors skip the middle men and publish themselves. They are lumped into this post because I think the same culprits are responsible for writers getting stuck in this stage.

Culprit 1: Putting our work out into the world is scary.

Ah, where would we creatives be without good old fear in our lives? Fortunately, this element is one most of us share – and I’d venture to say those who aren’t nervous putting their work out there aren’t putting out very good work.

I addressed this culprit in this post that I wrote for J. A. Allen’s blog, where I said this:

My bestselling novel was *this close* to being shoved under a mattress because of fear. After I got some bad feedback from a critique partner, I knew if I let anyone read it, one of two things would happen: 1. They would hate it and ridicule it mercilessly, or 2. No one would read it at all.

That’s right. I was afraid people would read it or not read it.

Yep, I just quoted myself. Blogception.

Anyway, the point is fear is real. I’ve known more than a few authors who have been sitting on finished books for years, primarily because of this apprehension. And what makes it even more difficult is the plethora of rejections that inevitably come with the querying process – we think that because thirty agents didn’t want our book that it means our book isn’t good, when the reality is it’s a matter of what they think will sell. It is very difficult for a brand new, no-name author to land an agent via cold queries.

The solution: Acknowledge that sharing our stuff is scary. Then, if you’ve followed an editing plan and had beta readers offer feedback, you can be confident that the thing you’re about to query to agents or publish will be able to stand – and realize that rejection isn’t necessarily a reflection of the quality of the work itself.

Culprit 2: The writer sees the book as a projection of self rather than a product.

Watch out. We’re getting all psychological up in here.

This culprit is why there’s a sting when we get rejections or bad reviews, and it kind of goes with the fear culprit, but it’s nuanced enough to deserve its own point. We spend so much time and so much energy creating and polishing our work that it starts to feel like an extension of our personalities. We instinctively believe that for someone to criticize our work is to criticize us.

Here’s the thing about that: It’s totally not helpful nor is it true.

Rejections and bad reviews are guarantees in this business. They will happen. In the case of queries, it’s a matter of what the agents think will sell. For self-publishers (and for traditionals after publication), it’s most often a matter of reader preference. Criticism and rejection happen to every writer, even the most famous billionaire ones. If those authors took every criticism to heart along the way, they wouldn’t be famous billionaires because out of self-preservation, they wouldn’t publish beyond the first book or two.

The solution: Realize books are inanimate products, and people will form subjective opinions about them.

Rejections and reviews are not about the author. Typically, readers and agents don’t know the author – nor do they care to. Their interest is solely in the book.

It helps to think of your book as something else – say, a shirt. When I go shopping, I don’t buy pink shirts because I don’t like pink. I’ll walk past those shirts 100% of the time, and if I’m gifted a pink shirt, I won’t wear it. Now, if I were to contact the designer and say I didn’t wear the shirt I was given because I don’t like pink, do you think that would upset the designer? Not likely.

Maybe I buy different colored shirts from that designer. Maybe I don’t. No matter what I do, there are pink-loving shirt wearers who will buy those pink shirts, and my preference is certainly no reflection on the designer’s skills. I was simply not the “audience,” to use author-speak.

Side note: Some authors may be stuck in the querying/publishing stage and not know it. Without deadlines, we can get comfortable revising and revising and revising again, or waiting until werewolf books are popular, or . . . something. For whatever reason, the author wakes up one morning and the book has been finished for five years and it’s still just a manuscript on the computer. If this is the case, and there’s isn’t more to be done with the book and/or people have asked what’s going on with it, it may be time to pry yourself out of the his stage.

If you’ve been stuck in the querying/publishing stage, what did you do to move out of it?

11 thoughts on “Where Writers Get Stuck: Querying and Publishing”