No writer wants to do that to their readers, so it’s worth figuring out what makes a scene good.

I decided to write this post when I ran across this quote on the interwebs: 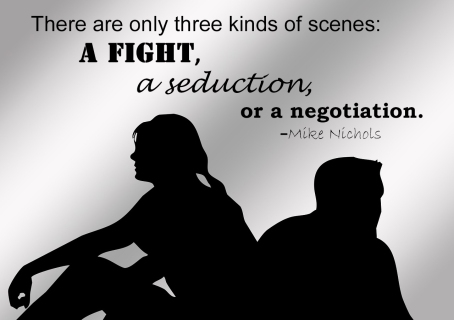 I didn’t know who Mike Nichols was at the time, but upon Googling I discovered he was a screenwriter and director. This quote appears on sites related to acting. So he may have been referring to movie scenes, but of course my novelist brain applied the quote to books.

There are lots of posts about how to write a scene in a novel. This one addresses different ways to launch scenes. This one talks about scenes and sequels (which we’ll get to in a minute). This one discusses layers of a scene.

For this post, I want to talk about scenes as they relate to the quote and boil them down to a simple question – what is a scene supposed to do?

In the most basic sense, a scene should do at least one of these two (but preferably both) things: reveal character or advance plot. I like the quote because it requires both. 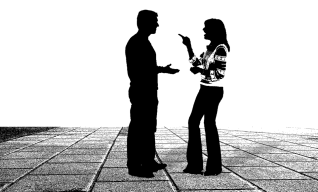 A fight is obvious conflict.

A seduction is a form of persuasion, which is also subtle conflict.

A negotiation is conflict with the goal of reaching a meeting of the minds (or if we’re using every definition of the word, it can also mean finding a way through a difficult circumstance – like negotiating a river in a raft).

If you think about it, fights and seductions are just different types of negotiations – a violent type or a sexy type. These three scenes, when done purposefully (because you could write a pointless fight), would have to move the plot forward and reveal character. Nothing occurs in a story for no reason, and we need to see how the protagonist deals with the conflict.

But are those kinds of scenes really the only possible ones?

You may be trying to think of scenes that aren’t fights, seductions, or negotiations. Before you get too far, let me throw this at you: not all “scenes” are really scenes. Some are sequels. This is how the second article I linked earlier differentiates the two:

A Scene has the following three-part pattern:

A Sequel has the following three-part pattern:

In a scene, conflict happens and/or new information forwarding the plot is revealed. In a sequel, the character is reacting to the action/information and deciding what to do with it.

Simply put, a scene is action, a sequel is reaction.

This is well demonstrated in Dan’s book The Navigators. After the big scene where the characters find the time machine in the mine, they move it to Barry’s apartment. What follows is a sequel where Barry is examining the machine – Dan uses this to describe the machine, but more importantly it opens up Barry’s dilemma and decision – he doesn’t know what it is entirely, and he decides to call Findlay for help. There isn’t a fight, seduction, or negotiation in that scene, but it isn’t a scene. It’s a sequel.

So if we’re just talking about scenes (not sequels), I have to agree with the quote. All three of those types involve conflict, and all scenes need conflict.

What do you think? Are there other scene types that aren’t a fight, seduction, or negotiation?

21 thoughts on “You’re Making A Scene: Writing The Building Blocks Of A Page-Turner”