About a week after Thanksgiving, I posted this on Facebook.

It led to a variety of comments.

There was one odd man out.

Yes, Dan, I called you odd. That’s what you get for liking that song.

This post has a different point than “Christmas music sucks” (though that’s a valid point). The point is what came from a conversation that went something like this: 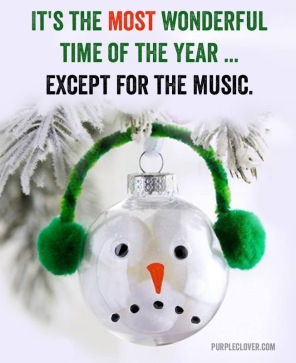 Me: I hate Christmas music.

So the point of this post is to figure out why I hate Christmas music. I have a few theories.

This feels most valid, but I have no empirical evidence whatsoever to support it. I do, however, have a string of comments that came after that snowman ornament pic that would counter it. I present them with snarky comments because they’re wrong.

I don’t know that song, but I do know my husband is afraid of hippopotami. Hippopotamuses. Those big gray things that can smash a watermelon with their jaws and can, oh yeah, kill you.

This person needs to put more egg in the nog and less rum. Also, what’s a git?

Theory 2: I only hate certain songs.

Better grow eyes in the back of your head, Grandma. I hear Dasher is over at Git Lady’s house drinking eggnog.

Can we all agree to hold off on the jingling of the bells?

That’s not one of my hated songs, however.

That Mariah Carey one makes the list, obviously. Let’s add to it Last Christmas and that one about the famine in Ethiopia. Santa Baby and Mommy Kissing Santa Claus make sense as a grown-up, and the moment you are old enough to get them is about the same moment you get creeped out by them. The topper, though, has to be this: 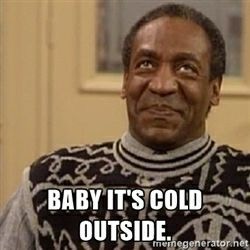 “Say, what’s in this drink?” is an actual line in that song! I prefer my Christmas music without the element of date rape, thanks.

All that venting aside, there are songs I can tolerate. I like the Trans Siberian Orchestra song that’s super popular (probably because no words).

That’s…about it. But it’s something.

Theory 3: I worked retail during the holiday season.

This is the most likely culprit. One year, I worked in a store that sold a variety of hot sauces, and the Christmas music they played was the same ten or so songs on repeat. On my first or second day, before I knew how to safely handle the really hot sauces, I touched my eye after touching one of the sampling bottles. Big mistake.

So as my eye was burning out of my head, I was hearing, “He’ll be coming down the chimney, down!” And then I got to hear that song eleventy billion times in the following weeks.

I recommend this as a torture method.

The retail problem isn’t just mine. Watch this.

This guy gets it.

So that’s my conclusion: retail killed my Christmas music spirit.

Unless you have a theory of your own. If so, share in the comments. I’m also interested to know everyone else’s stance on Christmas music. Because of Theory 1. For science.

20 thoughts on “Why Do I Hate Christmas Music?”