Confession: I didn’t jump onto the whole “The Walking Dead” bandwagon until recently.

Next confession: It was a message series at church that got me on board. But maybe that should be their confession.

I was a slow adopter of TWD because it’s such a fad – I never watched it, but all I had to do was get on Facebook on a Sunday evening to know it was on. Plus, all the zombies sounded gross (and they are, but not enough to deter me).

The clips they showed during church were compelling. So I hopped onto Amazon and watched the first episode of season 1. And the next episode. And the episode after that.

I finished season 1 in a few days and quickly jumped into season 2. I’m about ten episodes into that, and I am completely hooked. I watch one or two episodes every day.

I was quite surprised to realize the zombies aren’t the main hook of the series, at least for me. They fill only 10-15% of the show in a given episode. The addictive nature of the show, I think, comes from all the conflict among, between, and within the characters. Being a writer, I analyze why and how all this conflict works so well and strive to apply it to my own work. Being a blogger, I get to share my insights with you. Because without conflict, we have no stories.

I’ll illustrate how the show uses each type of literary conflict (man vs. man, man vs. self, man vs. nature, and let’s throw in man vs. society) using specific characters.

Spoiler alert – if you’re a late adopter like me and plan to watch the series at some point, I’ll be including details from seasons 1 and 2. All photos came from walkingdead.wikia.com.

He’s the MC, the guy in charge, also a “late adopter” into living with zombies, if you will. Because he’s the leader, he experiences the most Man vs. Man conflict.

It’s the most direct and easiest to define and use type of conflict. It’s protagonist vs. antagonist. The protag wants something, and the antag gets in the way. The protag must do something about the antag to reach his goal.

Rick experiences conflict with pretty much every other character. Shane wants his wife. Lori is his wife. Carl wants to grow up too quickly. Dale just wants to keep the group civil and his stuff accounted for. Rick has some intrapersonal conflict, but not as much as our next guy. 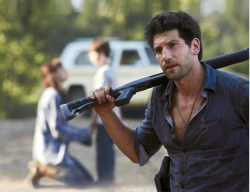 Man vs. Self – Shane

Shane is a fascinating character. He started out in season one being the “backup hero”. He filled in for Rick when everyone thought he was dead – including in his relationship with Lori. Once Rick ended up being alive, Shane had all the guilt of thinking Rick was dead (because he basically gave up on his friend) and then in the aftermath of the relationship. After the episode with Otis, it all went to hell for him. The scene where he shaves off his hair was an incredibly visual symbol of him shaving away his old self.

Viewers want to think of Shane as a bad guy after that. He’s a murderer, for crying out loud. But even with that in his and in all of our heads, he still has moments of nobility. He wants to protect Lori and Carl. He wants to do what’s best for the group, even if it makes him look like an ass. I’m currently waiting for a tipping point to see which way he’ll go.

Update: I finished season 2 the day after I posted this. So…yeah. Gonna have to find a new Man vs. Self example. Dangit.

In a way, all of the characters display Man vs. Nature, because they all have to fight off the zombies, who are more animal than human. But Daryl is the hunter. He has the ingrained know-how that keeps the group alive in more than one instance.

Daryl knows how to quickly find food and shelter. He took charge when Sophia was lost in the woods because he knows how to track. He had to bind his own wound. During one of the episodes when they were still looking for Sophia, he told a story of how he survived in the woods for nine days when he was a kid. He’s a badass guy.

This is the “fight the powers that be” conflict. Andrea stands up to anyone in authority pretty much from the beginning. This lends itself to a lot of Man vs. Man conflict – I could have easily put her in that category. It’s the motivation that separates Man vs. Man and Man vs. Society.

Even in this “society-less” world, there are rules. Most of them exist to avoid attracting zombies, but there are rules about how to kill the zombies themselves. Andrea’s first rebellion (that I can remember) occurred when Amy died. Amy had been bitten, so they all knew she would become a walker. The only way to keep that from happening is to shoot the victim in the head. But as Amy’s sister, Andrea refused to leave her side. It wasn’t until Amy “came back to life” as a walker that Andrea did what she needed to do (resulting in a bunch of Man vs. Self conflict for her as well).

Her most frequent conflicts in the first two seasons (at least until episode 10 in season 2) are with Dale. Dale has assumed a kind of fatherly role for Andrea, and she doesn’t like it. She doesn’t assume the “female” chores of laundry and cooking like the other women do, a point of contention with Lori and Carol.

So what does all this teach us about conflict in our stories?

The Walking Dead does three things that make all this work:

1.It includes all types of conflict.

Not only are they all there, they are layered and clash with each other. Shane’s inner conflict plays well with Andrea’s societal conflict, but Rick doesn’t have much use for Shane playing the hero. Daryl’s personality doesn’t play well with others, but he has his soft moments, suggesting intrapersonal conflict for him too.

2. It weaves all types throughout the story, giving each its turn.

We have a scene of Rick and Shane fighting followed by Andrea seeing a walker while she’s on the RV followed by Daryl falling off a horse and landing in a creek. One type of conflict isn’t on screen long, so the show doesn’t have a chance to get boring.

3. It doesn’t depend on one type to tell the story.

Each conflict can move the story forward, and external plot points (like Carl getting shot) are tools for showing each type. Sure, the whole show could be driven by Shane’s instability, or by Rick’s focus on mission, but that wouldn’t be nearly as interesting.

Obviously, the types of conflict you use and how frequently you use them depends on your story. But if you find yourself leaning heavily on one type, see if you can weave in some of the others. This is what I plan to do, and if all goes according to plan, my stories will be more engaging.

What kinds of conflict do you write most often? What types would you like to use more?

16 thoughts on “What Can “The Walking Dead” Teach Us About Conflict?”