Last night, I finally got the chance to watch the Season 7 premier of The Walking Dead. I made the mistake of watching it right before I went to bed.

It took a while to fall asleep.

Like, a couple of hours. Because man. That was rough.

Anyway, I’ll be using specific details from that episode in this post, so if you haven’t seen it and plan to, come back to this later because I’ll be dishing out a lot of spoilers.

We’re going to use Episode 1 of Season 7 to talk about adding conflict to stories. Before I saw the show, I’d planned to do a post about the following image I found on the Writing About Writing page on Facebook. 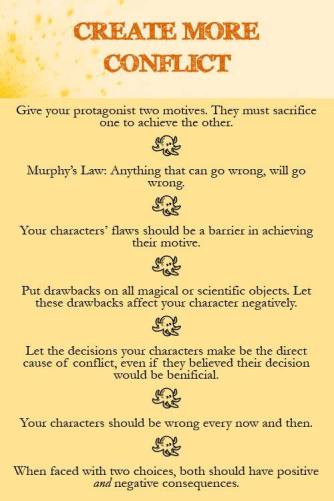 Because the image was in my mind as I watched, I saw how the episode included every single one of those strategies. If The Walking Dead writers can do this all that in a single episode, we can certainly include a few of these in the course of our own stories, right? So let’s break it down. 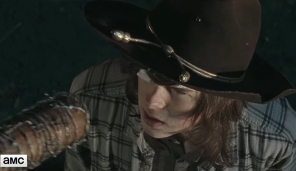 1. Give your protagonist two motives. They must sacrifice one to achieve the other.

This was shown near the end of the episode, where Negan forced Rick to cut off Carl’s arm (almost) or everyone in the group would die. This forced Rick’s two motives – protect his son and save the group – to be at odds. He couldn’t possibly do both. Either he sacrifice his son’s arm (and likely his life) to save the group, or he let the group die to save his son.

2. Murphy’s Law: Anything that can go wrong, will go wrong

The group being where Negan could attack them in the first place came about because of this element. Maggie experienced severe pain that required a doctor’s attention, and the only way she could get it was for the others to take her to another settlement. She’s pregnant, and of course a pregnancy can’t go smoothly in a post-apocalyptic world.

Once the group was intercepted by Negan, we all wondered if Maggie specifically would survive (we’re still wondering, frankly). Keeping her out all night and forcing her to witness her husband’s brutal murder couldn’t have helped. Now, if she does survive, she gets to raise her child as a single parent (like Rick). Because raising kids in the midst of zombies isn’t difficult enough already.

3. Your characters’ flaws should be a barrier in achieving their motive.

Daryl was a good illustration of this point. As Negan stood before the group, Daryl attacked against Negan’s direct order. Daryl’s always been a hothead, and in this case that lead to him being held hostage at the end of the episode. Not only did his attempted attack fail (because of course it would – he was grossly outnumbered and outgunned), but he put himself and the group in more danger.

4. Put drawbacks on all magical or scientific objects. Let these drawbacks affect your character negatively.

Let’s add “supernatural” to magical or scientific in this one (although I suppose zombies have elements of sci-fi). When Rick was with Negan on their little drive, Rick ended up on top of the RV and surrounded by zombies on all sides. Negan taunted him and eventually fired shots through the roof, forcing Rick to escape. The only way he could do that was to grab onto a zombie hanging from a bridge by the neck. Which should have worked to keep Rick out of reach of the biting zombies on the ground.

But zombies have a drawback – they’re dead. Rotting. Mister Hanging Zombie’s neck couldn’t support his weight and Rick’s weight. It didn’t take long for the neck to break – or to stretch out in a most gruesome fashion, rather – sending Rick into the sea of zombies below.

5. Let the decisions your characters make be the direct cause of conflict, even if they believed their decision would be beneficial.

Taking Maggie out of Alexandria could be one of these decisions, but a more direct one here is Rick promising to kill Negan. To Negan’s face.

It was a direct challenge to Negan’s authority, which for the most part has worked for Rick, until now. He probably thought the threat would give him some clout in Negan’s eyes. Instead, it lead to Negan taking Rick out alone, nearly getting him eaten by zombies, and then forcing him to cut off Carl’s arm. By the end, Rick argued that they couldn’t fight Negan despite Maggie’s pleas.

6. Your characters should be wrong every now and then.

This one overlaps with others I’ve mentioned – the group was wrong to leave Alexandria (although they didn’t know it). Rick was wrong to threaten Negan. Daryl was wrong to attack. One could argue that Abraham was wrong to tell Negan to suck his balls, but not saying that wouldn’t have improved his situation. He probably figured he had nothing more to lose.

7. When faced with two choices, both should have positive and negative consequences.

It’s hard to find anything positive in that episode, but we left it with two choices – follow Negan’s demands, or fight him. We don’t yet know which Rick and the others will choose, but we do know the stakes. Daryl is a hostage. Negan’s people know where Rick’s are. If Rick does what Negan wants, Daryl may live, but his group will continue to be at Negan’s mercy. If he disobeys, he may reassert his authority, but Daryl will likely die and the torment continues. But would it continue either way?

That’s why we tune in to the next episode (which I haven’t seen yet. I’m behind, so no spoilers in the comments please!)

Dan recently posted about not understanding the whole allure of The Walking Dead. I think the many layers of conflict is at the heart of it – if a shallow story has only one layer, then surely a story with many is truly engaging. We have to see how all of those conflicts work out.

What do you think? Is this why The Walking Dead is so popular, or are there other elements at play?