There is a place where I refuse to drive under any circumstances. That place is Houston, where my husband is from. 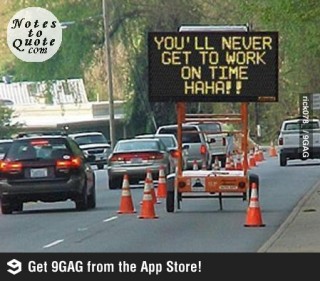 Driving there is terrifying. You have to cut across multiple lanes of traffic, while being cut off, while talking about the different routes you could take with your passenger, while dodging the merging and texting student driver. There’s honking and bird-flipping and all sorts of creative communication with other drivers. Oh, and there are about 3.5 million of them there. Count me out.

I live in a small city where driving is much less stressful, but drivers still behave badly. I know because my husband is an auto appraiser, and he’s never short on work. His theory is the drivers here mostly came from Houston. Ha.

Why do we tend to act ridiculously behind the wheel? I think there’s a feeling of anonymity, even though everyone can see each other through the windows. This is why people continue to pick their noses and rock out with singing and air guitar as if they are actually in the shower. Newsflash: windows are transparent. But I digress.

Back to anonymity. Driving a car is the physical equivalent of arguing on the internet. No one knows who you actually are and will probably never see you again, so you have a license to be nasty and/or stupid. Surfing the web on your phone while driving probably compounds the effect. Or maybe you get them mixed up and instead of flipping off the driver next to you, you give them a thumbs up because you were in the process of liking someone’s facebook status. Or something.

Anyway, everyone on the road has the same goal: to get somewhere, preferably uninjured. So maybe we should just relax, stop with the nonverbal gestures and support each other in our “getting places” goals. Or not, because then my husband will be out of work. Nevermind.