Today’s Bookbag title, The King of Torts by John Grisham, is a nod to the dozen-or-so Grisham novels I’ve read, more often than not while on vacation. For years, I didn’t leave my house for an extended trip without a Grisham novel in my purse. I lost at least one on a plane and ruined another when unexpected rain hit the beach. 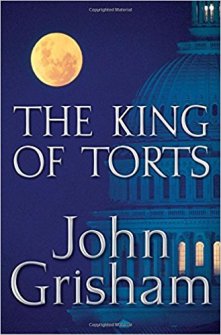 What can I say? Favorite authors promise a consistent style (I especially like Grisham’s snappy dialogue). Enjoy one book, and you’ll probably enjoy the others. So in my pre-kindle days, when I only got to pack one book, I didn’t have to worry much about toting along a dud.

The King of Torts was a good read (and perhaps one of Grisham’s lesser-known books, compared to, say, The Pelican Brief). It’s the story of Clay Carter, a public defender who starts off on the bottom rung of the court system’s ladder.

In a city of 76,000 lawyers, many of them clustered in megafirms within rifle shot of the U.S. Capitol–rich and powerful firms where the brightest associates were given obscene signing bonuses and the dullest ex-Congressmen were given lucrative lobbying deals and the hottest litigators came with their own agents–the Office of the Public Defender was far down in the minor leagues. Low A.

Clay takes what looks like a simple murder case, only there appears to be no motive whatsoever for the killing. At first he figures his client is lying, but when he learns of a shady pharmaceutical connection, he gets the chance to make big money on tort cases. It would be a huge jump in income and stature from what he had been doing.

“Punitive damages would be easy.”

“Depends. This case would be very hard to prove, Clay, because there’s no paperwork. Those files you snatched yesterday will reveal nothing. The counselors at D Camp and Clean Streets had no idea what kinds of drugs they were dispensing. The FDA never heard of Tarvan. My client would spend a billion on lawyers and experts and whoever else they need to protect them. Litigation would be a war because my client is so guilty!”

“Add ten for the lawyer.”

“Yes, that’s the deal, Clay. Ten million for you.”

“You must be kidding.”

“Dead serious. Thirty-four total. And I can write the checks right now.”

Clay’s character is tested as he wins cases, earning notoriety and millions more in legal fees. Of course, one has to ask–when the windfall occurs and promises to happen repeatedly, how long will it take before the good fortune runs out? And who might be out to stop it?

What K titles are in your Bookbag?

One thought on “The A-Z Bookbag: K is for The King of Torts”