I’ve been a legal adult for half of my life now, and I gotta say, we adults are screwed up. 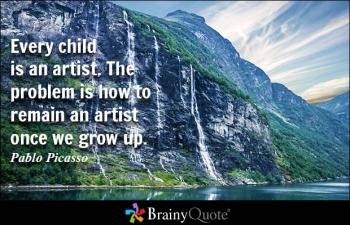 The prospect of growing up is scary to a lot of kids. Sure, they talk about how awesome it would be to eat whatever they want and not have bedtime, but the whole concept of adulthood is freaking huge. There are bills and houses and cars that need fixing and lawns to mow and oh yeah, college and a job that maybe you won’t dread waking up for every day.

Maybe kids don’t worry about that last one. Go find a first grader and ask her what she wants to be when she grows up. She won’t say she wants to work in a call center.

But the fact that many of us have to work crummy jobs, at least for a while, isn’t the reason we adults are screwed up. Businesses need call center workers, and sometimes you gotta take what you can get to pay the bills. The reason I think we’re screwed up is there’s a greater force at play here, one that is persuasive and stubborn and subtle.

I sing a lot. A lot. Pandora is playing through our house pretty much all the time, and if I’m cleaning or cooking, it has to be on a station that has a lot of songs I can sing along with. Sometimes, I’ll print out the chord sheet to a song I want to learn, head to the piano, and figure out how to play and sing it. My kids will grow up thinking moms sing. That’s just part of the package. I wouldn’t be surprised if they ask their future wives to do a singing audition.

I’ve enjoyed singing for as long as I can remember. When I was a kid, before I’d fall asleep, I’d stare at my ceiling and sing Little Mermaid songs. I sang with the radio in the car. I was in choir. In high school, they let me sing the national anthem at basketball games and gymnastics meets. 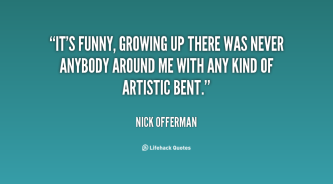 But something happened as I grew up…I realized it wasn’t cool to sing out loud anymore. Grown-ups just don’t do that. For several years, I quit singing unless it was in a structured setting where singing was allowed, like in church or at karaoke night. I sang in the car if I could do it without anyone knowing I was doing it.

And it’s not just singing that becomes frowned upon. There are way fewer dancers and artists and photographers and writers than I knew when I was a kid or even a teenager.

I should say it seems there are fewer adults with those leanings. I believe they’re still out there. They’re just hiding, because aside from those who go pro, grown-ups just don’t do those things. Singing and twirling and dancing are for kids. Kids haven’t learned how shitty life can be yet, so let them sing and dance and paint. Adults know better.

Oh, but in this case, I think the kids know better. 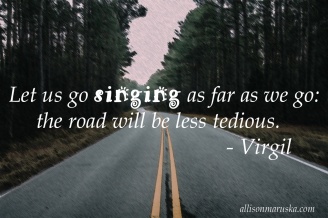 So a while back, I decided, screw it. I sing because it makes me happy and because I’m happy. I belt out Adele or Alanis or Evanescence while I do the dishes. I back up Fall Out Boy in the car. I sing the last song I heard to myself while I’m shopping. I don’t care who hears me. I’m not singing for them.

I know there are adults who have been shamed away from doing the creative things that make them happy. All those kids I knew and you knew, the ones who could draw or act or loved making pottery, are still out there. Some may even be reading this post. They just grew up and learned the thing that brings them joy is silly, a thing meant for kids. I think there’s a notion that as adult responsibilities loom, we outgrow these passions. We don’t. We simply bury them and try to replace them, most likely with less constructive or perhaps even destructive activities.

I remember the day I stopped singing. I don’t remember as well the day started again. But you can be damned sure there won’t be a second quitting day.

What about you? Have you buried a long-abandoned passion? Or have you rediscovered one?

14 thoughts on “Do You Remember The Day You Stopped Singing?”

Lily will only sit on you if you don’t, under any circumstances, touch her. #FussyKitty