Let’s see what this week’s flash fiction challenge is, I think as I open my email. Chuck Wendig’s charge is this: write an essay about why you write.

So I wasn’t going to write this one. I’ve sort of answered this question in author interviews and in casual conversation. What more can I have to say?

Writers from everywhere offered their tweets on the topic, everything from “we doubled your advance” to “can I get you more coffee/wine” to “I loved your book and wrote a review!” At the time I write this, the tag is still trending, so many, many thoughts are going out to cyberspace.

This is one of mine that received a respectable amount of attention:

A high school student who beta reads my YA stuff responded, resulting in this thread: 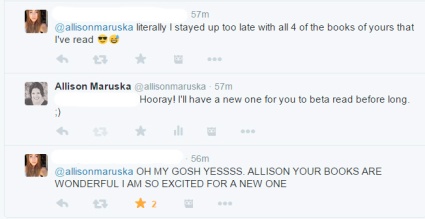 I started writing because I had some characters in my head and I figured out what their story should be. I didn’t start because I thought I would be brilliant or gifted or a best seller. I certainly didn’t start with the idea that it would make me rich and famous. I started because I just wanted to tell the story. I could have left it at that, written out a single book or two or three and felt pretty good about myself. Lots of people say they want to write a book. I did it. And I didn’t worry too much about quality, because it wasn’t like I was striving to create the next Great American Novel.

I just wanted to tell my story.

Eventually, however, I decided my story might be good enough for other people to read. I shared it with trusted friends, and it was well received. I felt pretty good about the prospects of steering towards a writing career.

It wasn’t until I joined my critique group that I realized how un-brilliant and un-gifted my prose was. So I received criticism. A lot of it. I learned. And I applied what I learned. This is a process that will never cease.

Now, I write for a different reason than when I started. Sure, I still like to tell stories. I still have characters in my head, and I want to share them with whoever wants to read them. But I’ve become more cognizant of telling my story in the most effective way possible.

I don’t want my writing to stand in the way of the story. I leave openings in my descriptions for readers to fill with their own backgrounds. I try to make my dialogue realistic and engaging. I like writing stories that, cliche as it may be, readers can’t put down.

I write because I love that my stories keep readers up past their bedtimes. I love that they think of the characters as if they’re real people. And you can’t beat hearing “I was talking to so-and-so about your book.”

In short, I write because it’s how I can make an impact.

It’s not so different from why I started teaching thirteen years ago.

I want to do something that matters, even if it’s only for one person and for a brief time. That’s good enough.

8 thoughts on “Why I Write”