When I was in sixth grade, my classmates and I learned all about melodramas, those stories where an obvious hero saves an obvious damsel in distress from an obvious cackling, mustache-twisting villain. I remember having to create melodramas, which is funny to ponder now as an adult, knowing twelve-year-olds don’t need help creating drama. Maybe the teachers assigned this particular task so we could clearly identify protagonists and antagonists, no matter how cheesy the result. 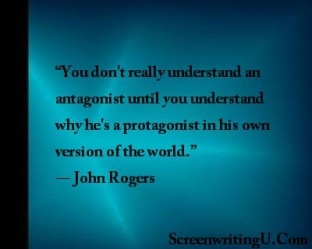 I’ve read several posts that say your bad guy can’t be all bad, which makes sense. No one, unless they’re a complete psychopath, I suppose, is 100% bad. I really got to thinking about this last night when I came home to my husband watching Gladiator. Obviously, Commodus was a wickedly bad guy. If he had a mustache, he would be twisting it. I started trying to find his good points. He wanted to rule Rome, but why? He wanted to be remembered as great, but how?

Think of the stories you know with obvious antagonists: Voldemort, Darth Vader, The Joker, The White Witch. What was their higher purpose? If their primary job was just to make life hell for the protagonists, they wouldn’t have been very interesting.

My favorite antagonists are those who are less obvious: Magneto (he’s Professor X’s buddy, for crying out loud), Megamind, Gru, and Elsa.

Yes, I said Elsa. Did you know your daughters were idolizing a bad guy? Granted, she didn’t know she almost destroyed her little town. Back up, though. Our protagonist is Anna, and in every moment after Elsa accidentally ice-shot her in the head, Elsa made Anna’s life difficult. Snowman? No. Party? Let’s not. That guy you just met? Marrying him would be a bad idea (even though everyone agreed, she still got in Anna’s way). I think Elsa’s character is the primary reason Frozen is such a compelling story. After Hans gives us a more tangible bad guy to loathe, Elsa has to rise above herself and be the hero. Brilliant.

Gru put us in the awkward position of rooting for the bad guy. He wants to steal the moon? That’s horrible! But he has to be more horrible than Vector! Magneto’s fighting for the well-being of his own kind – that’s noble, right?

I think the best antagonists are the ones that make us question our own moral codes, who make us analyze our possibly black-and-white categorizations of “good” and “bad”.

Do you agree? Who are your favorite antagonists?

2 thoughts on “The Best Bad Guys”