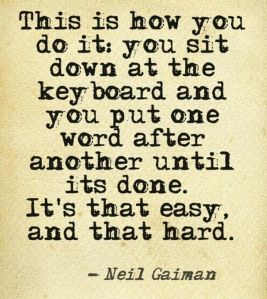 I never went to school to be a writer. I went to school to be a teacher, and only a small fraction of that time was devoted to being a writing teacher. Since I lack formal instruction, I’ve done my own research on the topics of what makes a good writer and what makes a good book. I’ve devoured books on the topic of plot construction, and I’ve read article after article about what makes interesting characters, dialogue, settings, and suspense. Here’s what I’ve learned:

There is no correct way to write a novel.

I know, I tricked you with the title. Sorry. But try to stick with me here.

The idea really struck me as I researched whether or not it’s good practice to begin a novel with dialogue. After reading several posts suggesting it’s a weak way to begin a story interspersed with posts recommending dialogue beginnings as great hooks, I decided that as long as my dialogue beginning works for my story, I don’t really care if some blogger somewhere decides my opening is weak.

That said, I’ve learned that there are some practices that make writers and critics of all stripes want to throw rotten tomatoes at an offending writer, including but not limited to: writing in the second person perspective, overuse of flashbacks or dream sequences, lame plot twists (he was dead all along!), and starting a book with a character waking up. And don’t get me started on  cliches.

I’ve never read a book written in the second person perspective, but I know there are best-selling authors out there that have committed the tomato-throwing offenses in the literary world. So even these seemingly unforgivable transgressions aren’t necessarily “wrong”.

That doesn’t mean that writers won’t do things that are irritating. I have my own list of offensive writing practices, and I’m sure my list is completely different from another reader’s list. At the top of my list is inauthentic dialogue. A twelve-year-old girl should not sound like an 80-year-old woman, unless she’s supposed to be a reincarnated spirit or something, and for the love of all things holy, tell us ahead of time if this is the case. A popular writer, who shall remain nameless in this post, wrote this bit of dialogue from the perspective of a 12-year-old girl:

“Ruth and moi – cannot abide false modesty any more than we can tolerate bragging. We’re straight-from-the-shoulder types. We know what our strengths are, and we’re proud of them. God knows, neither of us will win the Miss America contest, but we’re intelligent, very intelligent, and we’re not reluctant to admit to brains. And you are gorgeous, so stop being coy.”

I don’t care how intelligent she is; no one outside of a university (or a writer’s pen, apparently) talks like that. I rarely put a book aside without finishing it, but this one just never got better. It was either put it aside or throw my kindle across the room. I guess I’ll never know if she’s really an 80-year-old woman. Out of curiosity, I went back to the reviews for this book, and in spite of my displeasure with it, it is currently ranked between four and five stars, though a lot of the commenters complained about the dialogue.

Another sticky point for me is bullet point writing. I don’t know if it’s actually called that (no formal training) but it looks like this: The action. Is intense. Running. Tripped on the rug. Fell. Cracked nose.

This feels like Shatner writing to me. Spock. I can’t. Figure out. How. To enunciate. A sentence. Correctly. 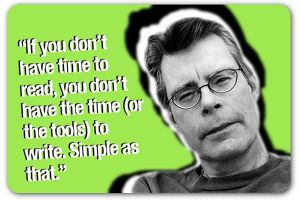 I say all that to say this: if you’re a writer, don’t spend a lot of time stressing about whether or not the exact way you’re doing it is the correct way. It’s a good idea to see what others have to say about various writing practices, but understand that even if you do something “wrong”, you’re not automatically cast off to literary Siberia. The best piece of advice I can offer actually came from Steven King: to be a better writer, you have to read, and you have to read a lot. It will familiarize you with the nuances of language, and most importantly, it will make you keenly aware of the writing practices that irritate the holy crap out of you so you avoid them in your own work.

Now, go forth and write.