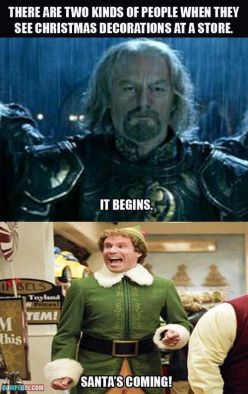 As I’ve grown older, I’ve come to a shocking realization: I’m a Scrooge.

No, I don’t oppress employees or make them beg for coal. I don’t kick poor people out on the street. And I’m not haunted by ghosts, at least not literal ones on a single night of the year.

I just can’t get behind the whole Christmas hoop-lah. And it’s not for lack of trying.

I almost didn’t write this post because of the potential grilling from those who are more like Buddy the Elf in the picture.

Them: Omigosh! How can you not like getting ready for Christmas??

Me: Oh, I dunno, I guess I’m not thrilled about rearranging an entire room of my house for only a month.

Don’t get me wrong, I’m totally on board with the whole theology behind Christmas. It’s just that I would be happier if it was more like Easter, where we think about it for a week or so, spend a day celebrating it with our families, and that’s it. Done. No spending of ridiculous amounts of money on gifts or the removal of a tree carcass involved.

I finally decided to write this post because I know I’m not alone here.

If I didn’t have a family, I would probably just hang a wreath on the wall or put one of those Charlie Brown trees on my dining room table and call it a day. But I have kids, and my husband likes to venture into the forest to chop down our tree. So we do, every year. We drag a whole closet’s worth of crap out into the middle of the room and unload boxes of ornaments and other Christmas-related paraphernalia. We spend hours hanging the lights and pretty things on the tree carcass and ooh and ahh when we turn off the overhead lights. Then we load the empty boxes back into the closet, only to take them out again a month later to repack the lights and pretty things until next year, and the tree carcass becomes firewood.

Some people leave their tree up as long as possible. Not me. I have ours down by the 26th, maybe the 27th at the latest. I want my family room back, and having the tree up longer drives me freaking crazy. You’ve had at least two months to assault my consciousness, Christmas. Time to move on.

I wonder if the reason I can’t get excited about Christmas is because everyone thinks that I should. It starts around October with the Christmas stuff in the stores, as if to say “It’s coming!! Aren’t you just so excited??” No, not re

ally. Thanks for asking. Crappy 80’s renditions of tired Christmas songs play all the time everywhere, starting before Thanksgiving. I wonder if this is supposed to make Scrooges like me feel nostalgic.  Then, hopefully after Thanksgiving, I’m expected to take my kids to sit on a stranger’s lap and tell him what they want for Christmas. If I’m lucky, they’ll tell me too, so I can give the stranger the credit on Christmas morning. That’s fun.

There is one part of the whole Christmas experience that I love: Christmas Eve, especially that part after church but before the kids go to bed. It’s quiet, most of the preparations are done, and only the anticipation of the next morning remains. The stores have mostly shut down, and the people who were out doing last minute shopping just hours before are home now. The commercialism is finally behind us,
at least for a few hours until the returning chaos begins.  But for now, it’s peaceful. The kids actually want to go to bed early, which they do after we read the Christmas story. If I planned well, the presents are wrapped, and the night requires little more of me than the eating of Santa’s cookies. The husband and I watch A Christmas Story together after the kids are in bed. We can just sit back and breathe.

Until then, I guess I’ll have to ask the more spirited among you to model your excitement so I can fake it effectively.  Or maybe I can drink wine and throw ornaments and those who are obnoxiously spirited. That could be fun.