If you spend more than 10 minutes among the general public, you know that there are more than enough obnoxious behaviors to go around. I don’t know if I’m just cranky or things are really getting worse, but I’ve been noticing them more lately. Consider this post a crude response to a pretend Dear Abby letter about how to not suck at life. I’ll change Abby’s name to Whimsigirl so I don’t get sued. Chances are you know someone who might need a nudge in one of these areas.

Dear Whimsigirl,
How do I not suck at life?
Sincerely,
Curious

Dear Curious,
Do all the the following.
1. Pick up after your damn self.
Have you noticed trash everywhere? Even when there are garbage cans in a very close proximity? I have never understood why some people leave their crap laying around for other people to deal with. Maybe they think it’s the worker’s job, and maybe it technically is, but you don’t need to make their job suck more than it probably already does. The degree to which it will hurt you is exactly zero. So use the trash cans.
2. Tip well.
It’s no secret that many in the service industry, especially waitstaff, get paid pathetically. It’s also no secret that they bear the brunt of the wrath of disgruntled customers. The person who serves you, let’s say a waiter, is only one part in a much bigger system. A restaurant has cooks, busboys, and hostesses who are all part of your dining experience. Not tipping the waiter (who probably has to share the tips) is at best not fair, and at worst makes you a complete asshat. You don’t want to be a complete asshat. If there’s a problem with the service, speak to the manager about it. Stiffing the waiter isn’t the solution.
3. Hang up your phone and don’t text while someone is trying to serve you.
Whether it be at the register, while the waiter is taking your order, or you’re getting a haircut, using your phone when you should be acknowledging someone doing something for you makes you look like an entitled brat who sees yourself as above whoever is serving you. And maybe that’s true, but you don’t have to be rude while you think that.
4. Dress for the occasion. 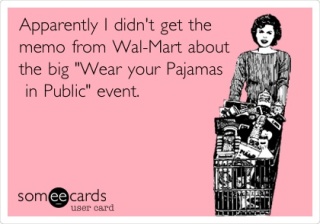 I addressed this one in my post about trends that I hope don’t continue, specifically about the abundance of jammie-wearing in public. This point goes beyond that. Don’t wear jeans to a job interview. If the temperature drops below 60*F, shorts are probably not the best choice. No one wants to see your underwear in public, and if they do, they are really creepy and you shouldn’t want to show it to them anyway.  You should look like you know how to dress yourself without Mommy’s help.
5. Use your manners.
Say “thank you” if someone holds the door for you. Use phrases like “if you don’t mind” and “I appreciate your help” if someone is doing you a favor. They will like you more, and maybe you don’t care if they like you, but I don’t think anyone wants to come across as a huge jerk.
6. Go out of your way to help people.
You don’t even need to go way out of your way. If you’re at the grocery store and notice something in the wrong place, put it in the right place. Let someone with only a few things in front of you at the register. Compliment strangers. Help someone who looks lost. If you’re a believer in divine justice or karma or whatever, paying it forward will come back to you.
7. Teach your kids the other six points.
Wouldn’t it be great if those in the older generation didn’t have to wring their hands in frustration when they see the behavior of those in the younger generation? It is, in fact, possible to teach children to be respectable human beings.
So, Curious, I hope this has been a helpful lesson in how to not suck at life. And I realize that the title of this post is an overstatement. You can do six of these things well and just need a bit of improvement in the 7th and not suck at life in total. But I don’t think an overall attitude of self improvement is a bad thing.
Sincerely,
Whimsigirl

Finally finished! And I was able to get it onto the bed before another cat jumped on it! 😅 #crochet #fallcolors