There’s an interesting phenomenon in the blogospere and in social media. It looks something like this:

“I’m sorry I haven’t posted in a while.”

“I’m sorry for posting so often.”

“Sorry for all the book posts.”

I noticed the first example in blogs a while ago, and it struck me as odd from the beginning – why is not publishing very often something to be sorry for? We all have busy lives, and to be honest, every time I saw that line, I literally had no idea it had been a while. I might notice if I blogger who had posted daily suddenly stopped, but it would take more than a day or two.

And again, even if I did notice right away, is that something the blogger needs to apologize for?

It may also be helpful to consider the “spotlight effect,” the psychological sense that others are keeping close note of our failures. In reality, many people are too inwardly focused on themselves to notice or care much about the details you tend to overemphasize in your mind. Putting things in perspective can relax this reflex.

Now, I don’t think the majority of chronic online apologizers are thinking everyone notices every little thing they do. I suspect it’s more a case of what I would call misplaced consideration, like, “Sorry I haven’t been around. It was inconsiderate of me to leave you hanging.” And it might have been, but seriously – who’s put off if you post a day or two later than normal? 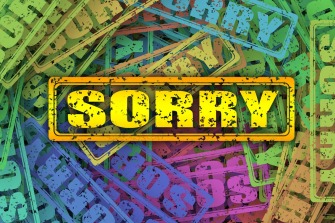 This post discusses how over-apologizing can undermine our professionalism at work, including how it becomes a hedge for an assertive statement and makes us sound less confident. Piggybacking on that, my experience suggests that apologizing for things that don’t require it invites negative attention.

When a genuine case for apologizing happens, it’s because there has been an offense. Someone is upset. When we hear “sorry,” historically, that means there is conflict in the air. It’s unsettling. Apologizing for something that was not offensive (like posting more often than normal) makes the unoffended reader wonder why they were supposed to be offended, and it puts them on the defensive a little bit.

And even if the reader was offended by something (say, the political post, or by something controversial in a book), that might not even warrant an apology. Discomfort doesn’t always equal an apology-worthy offense. Just because someone disagrees doesn’t mean you should be sorry. No author would reply to a negative review with an apology.

Social media presences ebb and flow. Book writers and other business people will promote their stuff. There are controversial things going on in the world that deserve to be discussed by people with varying opinions. None of these cases require an apology (unless, I suppose, the conversation devolves into name calling).

So, if you’re saying “sorry,” make sure it’s warranted. You don’t have to apologize for existing and for being you.

17 thoughts on “Is There Too Much Apologizing Going On?”