When I published my first book twenty-one months ago (two years ago come February, so you don’t have to math), I didn’t know what to expect. I knew I’d sell some copies, probably my friends would read it, and it would get a handful reviews (hopefully good ones).

If you’ve followed the blog for a while, you know how things really went – 20,000 ebooks sold in the first year and thousands more sold since its first birthday. 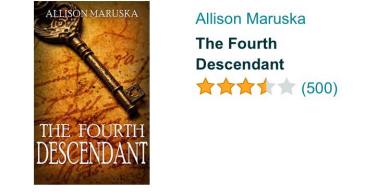 Today, it got its 500th Amazon review (thankfully, it was a 5-star review), which is an exciting milestone. I tried to find the average number of reviews for published books and didn’t get anywhere, but I know the majority of books see far fewer than 500, my other books included (so far. *knocks on wood*). So being on this side of 500, I thought I’d share a few things I’ve learned along the way, for authors just starting out or working to get reviews for their own books.

1. Getting reviews is freaking hard.

When your book is just starting out, you’re pretty dependent on getting friends and followers to write reviews to help get the ball rolling. Asking betas to write reviews is a good way to start strong (I had twenty betas for this book). Whenever someone says they read your book, ask for a review. Maybe half of the people you ask will write one, and that’s probably a generous guess. But even if only half do, that’s a handful of reviews you wouldn’t have otherwise, and those help sell the book.

People can be shy, and writing reviews takes time. They also don’t realize how important reviews are, especially to a new book/new author. If you’re a non-author type reading this post – this is why we may resort to shameless begging. If you’re an author type – don’t give up. Keep promoting and keep selling and keep asking for reviews. It’s the only way to get them.

When Descendant was accepted by a well-known promotional service, they wanted to list it with action/adventure titles. I didn’t worry about it much – there is a little adventure in there, after all. Maybe the editors knew something I didn’t.

Well, the promo went exceptionally well, sales-wise. Then reviews started coming in. Some were good. An uncomfortable handful weren’t. A few were downright angry. And judging from the words written, it mostly had to do with the miscategorization.

3. The bad ones can be helpful.

Bad reviews help in a couple of ways. First, if a book has only four- and five-star reviews, it appears the author has a bunch of friends and family reading the book – or worse, that the author may have purchased the reviews (which obviously aren’t legitimate). Negative reviews show that real readers who are not connected to the author are reading the book.

The other way they help is they often say things that help a potential reader decide to buy (or not). For example, if a book has a lot of bad language and a negative review says so, a reader sensitive to that will either read it and be prepared, or they’ll pass and save you another potential negative review. Or in the case of my book, a negative review can tell someone expecting a thriller that it’s really more of a mystery.

Some reviews say single words. That single word may even be misspelled. A reviewer may complain about a billing problem and punish your book for it.

I want to tell you a secret – even those reviews help, because they increase the overall number of reviews. That can mean the difference between Amazon adding your book to their mailings or not, and getting added means more sales. So you can thank the billing complainer in the end.

5. Reviews are about the book, not about you (even if they say otherwise).

I’ve had a negative reviewer or two verbally attack me in their reviews. I’ve had far more positive ones praise my efforts. Even in these, the reviewers are responding to the book, not to me personally. I put forth art into the world, and part of that deal is people will talk about it. And you know what? Good or bad, you want people to talk about it. When that happens, it gets onto more people’s radars and into more readers’ shopping carts.

All that said, I want to thank everyone who reviewed The Fourth Descendant (and/or my other books) from the bottom of my heart. You’re talking about them, and that helps me more than I can say. So I’ll let Liana Brooks say it for me.

32 thoughts on “Five Things I Learned From 500 Reviews”