One of the Great Truths in the Writer’s Bible is this: the cover can make or break the success of your book. Doesn’t matter how good the stuff inside is. If the cover isn’t intriguing (or worse, if it’s deterring), if it doesn’t compel the potential reader to buy/borrow, it hasn’t done its job. Period.

Since the cover is so super important, I decided to try a little experiment that I hope will benefit anyone searching for a designer in the future.

I recently needed to acquire covers for two separate books at the same time. I don’t recommend this if you can avoid it, because expensive. But I found a silver lining to the situation – I could use two different designers, tell you how each experience went, and maybe you can use the information when you need a cover for your next masterpiece.

Some side notes – there are LOTS of cover designers out there. I picked the two I did because they were recommended to me and because I could have the covers completed for the same price, which I thought would work best for comparison’s sake.

I found 99designs to be a strange bird. The idea is you run a design contest – you fill out a brief describing the project you need completed, and designers submit their ideas, hoping they’ll be the winning pick. You choose the prize at the time you complete the brief from three “levels” – the theory is higher prizes attract better designers. I chose the second level to keep the price the same as the designer who took control of the other cover. That level said I could expect to receive around 80 design submissions. By the end, I’d received 160 (including designs that came from modifications of initial ideas).

There’s an element of risk involved. You have no idea what quality of designs you’ll get (some were really bad). You have the option of getting your money back if you don’t get a winner, but if you guarantee the prize (meaning you don’t get a refund), you have a better shot of getting professional designers, or so they say. I guaranteed mine after seeing a few designs that were contenders.

99designs uses some strange time limits. From the moment you hit the “go” button, the timeline goes like this:

4 days for initial subs to come in, then contest runner (me) chooses finalists

3 days for finalists to complete designs

14 days to choose the winner

4 days for the initial designs was fine. 3 days for the finalists to put their best product forward was also fine.

14 days to pick a winner is ridiculous. I picked one within hours of the contest ending (after polling, which I’ll get to in a minute). And I didn’t understand why the winning designer and I had a three-day limit to finish what we wanted to do. The deadline seemed arbitrary at that point. Since we were essentially business partners, I felt we should have been able to work as long as we needed to get the cover just right (the time was fine for us, but that may not be the case for everyone).

99designs has a feature where you can put submitted designs into a poll and copy the link onto social media accounts. Friends can go in and pick their favorites. Cool, right?

To a point. One thing I didn’t realize with the polls is some designers like to track you down on social media, find your poll, and mess up your results by giving their own designs 5 stars and all the others 1 star. I emailed a complaint and was basically told “that’s just what happens.” I suggested they add language to the designer user agreement saying they won’t participate in polls or they risk their status as designers. The guy thought it was a good idea (but really, no one’s thought of this before? Hmm.)

All that considered, I ended up with a cool cover that I’m very pleased with. Project Renovatio is the first part of a trilogy, and the designer has agreed to work on the covers for the other two books, ensuring a consistent style. So I’m happy with the end result, though the process was rather bumpy.

Project Renovatio will be out in the next month or two, so stay tuned for contests and pre-order deals. 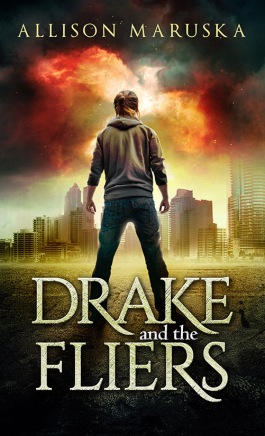 Cover 2: Drake and the Fliers

But Drake and the Fliers already has a cover, you may be thinking.

Yes, it does. It came out at the end of November, and after a few months and a lot of careful consideration, I decided a cover with a broader age and genre appeal was in order.

Damonza is much more straightforward than 99designs. You submit what you need and in two weeks, two initial designs arrive in your email. You offer suggested changes; they modify and send the new ones.

I imagine the back-and-forth can go on as long as needed, but after one round of changes I was happy with the cover that ended up being the final one.

My only complaint about Damonza – and it barely qualifies as a complaint – is there’s quite a lag between emails. I suspect the designer who worked on my cover lives on the other side of the world. As of this post, I’ve approved both the ebook and paperback covers, paid the balance, and am waiting for the high-resolution files to arrive in my inbox.

Damonza was very cooperative and I highly recommend them for cover design. While I went with a custom design and paid extra for that, there is a wide variety of pre-made covers that are lower in price and they’re well done.

Drake and the Fliers is currently for sale on Amazon.

If you find yourself in the market for a cover, I hope this information is useful to you. It was certainly useful to me.

25 thoughts on “A Tale Of Two Covers”