When I was a kid, and the paper arrived on Sundays, I’d read it. Not just the comics, like most kids. I read the news stories, the business section, and if I was really bored, the lifestyle pages. Before I set it aside, there was one other page I would read every week: the obituary page.

I try not to think it was morbid. It was more of a curiosity. Who were these people? How did they die? Were they young? Did they have families? What were their lives like before they earned three square inches of space in a weekly publication?

Often, the listings were simple: So-and-so passed away peacefully on this date. He’s survived by his wife and their two daughters.

Have you ever thought about that phrase, “survived by”? It implies that the person – the one who undoubtedly died – survived.

Of course, it doesn’t literally mean that. It means that through loved ones, a person lives on. Even if it was only within a family, that person made a lasting impact.

I’m writing this a few hours after learning my grandma is losing her battle with cancer. It has been a valiant fight spanning several years. They tried every surgery, chemotherapy combination, and even experimental remedies. But here we are, five years later, and she’s dying.

I’ve never known life without her in it. She was 42 when I was born – young to be a grandma. I’ll be that age in 7 years. My earliest memory included her. It was a birthday party – my sister’s second, I believe. My sis wore a sky blue dress, and her hair was so blonde it almost glowed.

We often went to Grandma’s house. She’d get after Pappap when he got ornery, shaking her first at him and scrunching her face accordingly, asking him if he wanted a knuckle sandwich. In the car, while waiting at a red light, she’d say a little rhyme to make the light turn green. It worked. I’m not kidding.

She was always a bird lover, favoring cardinals, hummingbirds, and owls. I’m sure my love for owls came from her. She had pet birds for many years – parakeets and cockatiels. She named many of them Chipper. We named ours Flip, and I think it was her idea. Flip the bird. And she had no idea.

She trained her birds to leave the cage and not freak out. They sat on her shoulder while she did whatever she needed to do. It wasn’t always a great idea, though. One time her bird went swimming in my cousin’s tomato soup.

Are these the kinds of memories that will make her “survive”?

I don’t know how she managed it, but her hair never turned gray. And she didn’t dye it. The only time I saw her with gray hair was the Christmas she was in the middle of chemo and she opted for a gray wig. When her hair grew back, it was light brown.

She had this container of body powder that smelled really good, and when we spent the night, after our baths, my sister and I got to use it. Very Grandma’s House, that smell. Then we’d climb into the twin beds covered with thin brown blankets and go to sleep, hoping morning would come soon. Mornings at Grandma’s were the best. We got up early because her house was bright. Really bright. I could never quite figure out how. I mean, our house had windows too, but it was never so bright and cheery in the morning. The brightness seemed to come from within.

We’d eat her sweet cereal that mom would never let us have at home and breathe in the smell of brewed coffee, also unique to her house, since our parents didn’t drink coffee. We’d feed peanuts to her neighborhood squirrels and maybe chase the dog around in her huge yard.

Are these the kinds of memories they meant?

Yes, she really has a suit of armor. She named it Christopher Knight.

She told us not to kick our heels on the wall when we sat on the landing next to Christopher.

She showed us how to put the scissors back into the drawer just right.

She reused creamer bottles forever by refilling them from a bigger jug. The flavors never matched the labels.

She kept felt or bubble wrap between her pans to keep them from getting scratched.

She had a glass cutting board on the counter at all times, so it was always there when you needed it.

She made gallons of gravy on Thanksgiving.

She brushed the tangles out of my waist-length hair.

She sprayed us with Skin So Soft to keep the mosquitoes from biting.

She lovingly accepted each of the dozens of pot holders I made for her.

I could go on for several more pages, and these are just my memories. She has a husband, siblings, three kids, nine grandkids, going on ten great-grandkids, and countless extended family members and family friends.

I’d say the chances of her surviving by us are pretty good.

I wrote this on April 16th. Grandma passed away on Tuesday, just two days ago. I debated if I should share this, and in the end I decided I wanted others to see her beautiful spirit. 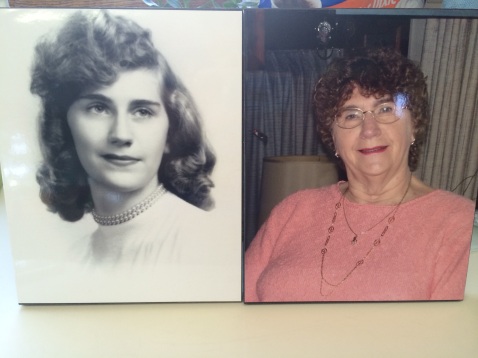 14 thoughts on “Surviving By”