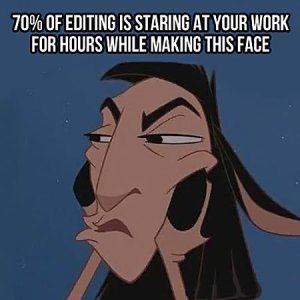 Editing is a vitally important step in the writing process. I don’t know about the rest of you, but my first drafts suuuuuuck.

Did you see that episode of Mythbusters where they literally took a piece of shit and polished it to a lovely sheen? That’s the editing process. Though one would hope that the final result isn’t still shit.

Having been extremely active in my online critique group for a year, I’ve learned something interesting – some authors don’t stop editing. EVER.

I’m prone to this, so there’s no judgment here. I get it.

They put their chapters up for review. The chapters are reviewed. This continues week after week until the book is finished. Then, the author queries agents and lands a publishing deal.

What I’ve seen happen more than a few times is the book goes completely through the review cycle, the author is congratulated on completing a novel, and then the book starts the review cycle again.

It’s a matter of multiple drafts, I’m sure. I’m giving my current WIP the same treatment I gave The Fourth Descendant: I ran the chapters through a private queue where only a few trusted critique partners could read them, then I posted the revised chapters in the public queue where anyone could have at them.

It worked beautifully for Descendant. I expect the same result with the new book.

But I’m leaving something out.

After Descendant finished in the private queue, I started querying agents. I was getting only mild nibbles, so I put the first chapter in the public queue in case it wasn’t “hooky” enough. Long story short, I got great feedback on chapter one, so I posted the rest and let the interested critiquers read the whole thing. It took months and months but they greatly improved the book.

And the agents? Still only mild interest.

Eventually, I decided that agents probably wouldn’t ever find the book marketable. There are four main characters. The story doesn’t follow a trendy pattern. I’m a newbie. blah blah blah. Point is, I had a decision to make: keep editing until an agent bites, or publish myself.

I could edit until I retire and not make it palatable to agents. That was a risk I took in writing something outside the literary norm. Keep editing, and that may have been all that came of the book.

The first time one of my critique partners started running revised chapters through the queue again, I asked why. She said she would revise until she sold to an agent. Similar answer from another partner. And another.

After some nudging from a fellow author, I decided to jump out of the loop and publish myself. And you know what? Descendant has done pretty darn well for itself. Granted, I had enough feedback from critique partners and beta readers to know it wouldn’t be a dud. So there’s that.

So if you’ve been editing the same project repeatedly, maybe it’s time to get out of the loop, publish it yourself or query your brains out, and start something else. You can’t move on to your next brilliant work if you’re still spinning your wheels on the last one.