I’m writing on this topic because it’s a real question of mine, and I feel like I’ve been running in circles with it. Maybe thinking about it in type will bring me to some kind of conclusion.

There are a few rules about novel openings that seem standard: don’t open with a character waking up/with an alarm clock, don’t open with the weather, don’t open with a giant info-dump about the character’s description. All right, I’m on board with all of that. Easy enough. Where I get stuck is the tempo of a book opening. Is it better to ease into the story or smack the reader in the face with immediate action?

Writers/agents/editors say you need a hook to start a novel. Makes sense. Something interesting needs to happen to draw the reader into the story and keep them there. My critique group has a queue called the “hook queue”, which is a nightmarish place to be because you put the first chapter up and critters tell you the exact point when they stopped reading or “failed to be hooked”. Ouch.

I haven’t submitted to the hook queue myself, but I have submitted a few novel openings to the regular queue. Allow me to show you how some of this went down with just an opening paragraph (though opinions were about the first scene) of the YA novel I’ve been working on. I put the story on the critique site because I couldn’t figure out the best way to open it.

This was the original opening:

Drake turned his sister’s dead phone around in his hand while staring out the broken window at the desolate city. The hot, summer air blew against his face.

The verdict? Too slow. Why not start at the actual confrontation that occurred just before this? Fair enough, I thought. New opening:

Drake squeezed his eyes closed at the sound of the shattering glass. He pulled against the two who held his arms, keeping him from throwing the vandal out the thirty-eighth floor window.

I haven’t submitted the revised chapter, but my author friend who reads all my work said she doesn’t know enough about the character to care if someone is breaking his stuff. 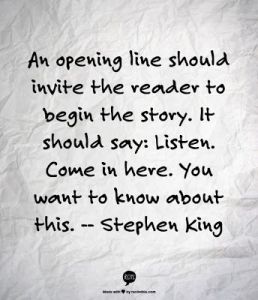 e been thinking about this too narrowly. Maybe it doesn’t have to be slow vs. action. Maybe it has to just be interesting enough to keep the reader there until the next interesting thing occurs. I read somewhere (and I can’t remember where – if any of you know what I’m talking about, please tell me because I’d love to find it again) that we basically “buy time” from the reader with our opening pages and chapters. The first page gets them for the next ten (or whatever the number was), and those ten keep them for the next hundred.

While I was thinking about this, I started reading a new book, and the opening paragraph is the description of a house. A house. No character. No action. It was just a house. Granted, it was beautifully described, but it certainly wasn’t doing or thinking anything. I’m pretty sure if I submitted that to the critique group, I would be ripped to shreds. But there it was, in a best-selling novel, and you know what? I kept reading. In the mood of that chapter, an action opening wouldn’t have made any sense at all.

So I think my approach should be open with what will keep them there. How that’s done depends on the mood of the chapter and the book as a whole.

What do you think? Do you prefer writing or reading certain types of openings?

5 thoughts on “Slow Or With A Bang: What’s The Best Way To Start A Novel?”