Today’s review is one I’ve looked forward to writing more than others because it’s unlike anything else I’ve read.

Allow me to introduce you to The Gospel According to Satan by Daniel Ferguson. I beta read it in January, and having grown up in an evangelical family, I can safely say this book will ruffle plenty of Fundamentalist feathers (because it “humanizes” Satan). 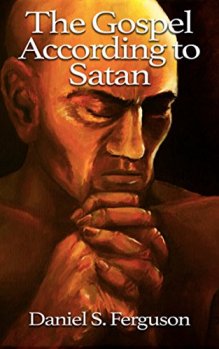 The story begins at the very beginning, before Satan’s fall, when he was called Samuel. Through Satan’s perspective, we see the heart behind the fall and get a new view of familiar Bible stories, including the original sin in the Garden of Eden.

“What are you doing?” Satan began, unsure how to begin his ploy.

The woman trembled; she did not seem accustomed to the animals speaking to her. Her shock gave way to curiosity, however, and she answered, “We are picking fruit to eat, serpent,” she said, smiling. “We do this every day.”

Satan hoped to understand the process better to see what use it might have for him. “Why?”

“Because we’ll get hungry otherwise, just like you would. We all have to eat to live.”

Satan paused. The Enemy had built these creatures with such fragility. They had to undergo so many daily activities to survive, and their ability to subsist seemed important to them. This might, Satan reasoned, be the most effective way to turn them away from the Enemy; if they were focused on their lives, they might forget their Creator.

One of my favorite moments, though, was when Satan came before the Lord at the start of the story of Job, when he had to cleanse himself. Being Satan, the holy water burned him terribly, but he did it nonetheless. The scene captured some of the best writing I’ve seen.

Also fascinating were Satan’s interactions with Jesus (called Joshua in this book). In Jesus’s early years, he had Satan read the Law out loud to him over and over, saying “again” at each completion. Another reading starts Jesus’s forty days in the wilderness and must take that long to read, because Satan hadn’t finished by the time we reach his temptation of Jesus.

“You should eat,” Satan said, somewhere in the middle of Isaiah’s second scroll.

“Said the snake to Eve.”

Satan smirked. “Nonsense. There’s not a tree in sight.”

Joshua laughed, then started hacking. “Every word,” he insisted between coughs, pointing at the scroll.

I can’t speak for others who learned these stories in a church setting, but I had never imagined Satan and Jesus sharing a laugh.

Also in my Bookbag: Gregor the Overlander

What G titles are in your Bookbag?

5 thoughts on “The A-Z Bookbag: G is for The Gospel According to Satan”