Last week, I participated in J. A. Allen‘s Sunday Scribble Challenge, wherein we write a brief entry in response to a prompt. This was last week’s prompt: 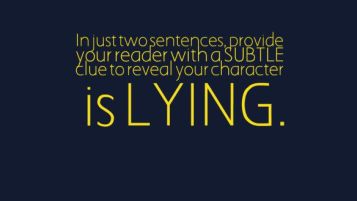 Two sentences isn’t much space, unless you write a bunch of clauses with commas, and those aren’t my style. So I had to rely on something else to relay a dishonest character. 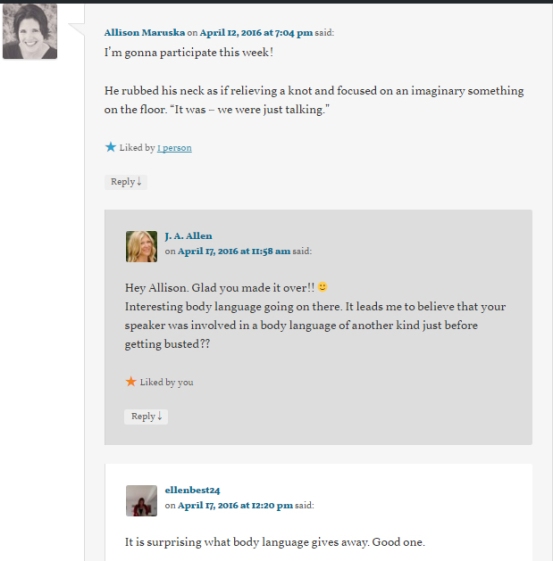 Ah, body language, the magnificent medium to communicate much more than our words. We rely on it in our daily lives. The most popular statistic states only 7% of communication comes from the words themselves – the rest comes from body language and elements such as tone and inflection (click here for an article explaining these numbers in more detail).

Makes you wonder how much we really say via texting, doesn’t it?

In fiction writing, body language does several jobs. We use it to show how a character is feeling or that they are hiding something. It functions as beats so we don’t need tags. It’s also helpful to set mood. Take a look at these two sets of dialogue. The only differences between them is the body language of the characters.

I ended the call and smiled at my daughter. “Grandma’s coming over.”

Gabi beamed and jumped to her feet, dropping her doll’s crown in the process. “Really? When?” She bounced on her toes.

“In an hour. Now go get dressed.” I rushed to the kitchen to assemble lunch supplies.

Now compare to this:

I ended the call, scowling. “Grandma’s coming over.”

Gabi’s shoulders slumped, letting her doll fall next to her leg. “Really? When?” She blinked rapidly.

“In an hour. Now go get dressed.” I trudged to the kitchen and pulled whatever mildly acceptable food I could find from the fridge.

From these two bits, we can also use body language to infer back story. What would you say about the circumstances for each chunk?

While the story impacts how the characters act and react, the types of body language you use also depends on the characters themselves. Men and women tend to use different mannerisms. Personality plays a role. Perhaps your MC has a nail biting habit or wiggles her leg under the table. Certain emotions usually appear in body language, as outlined in these charts. 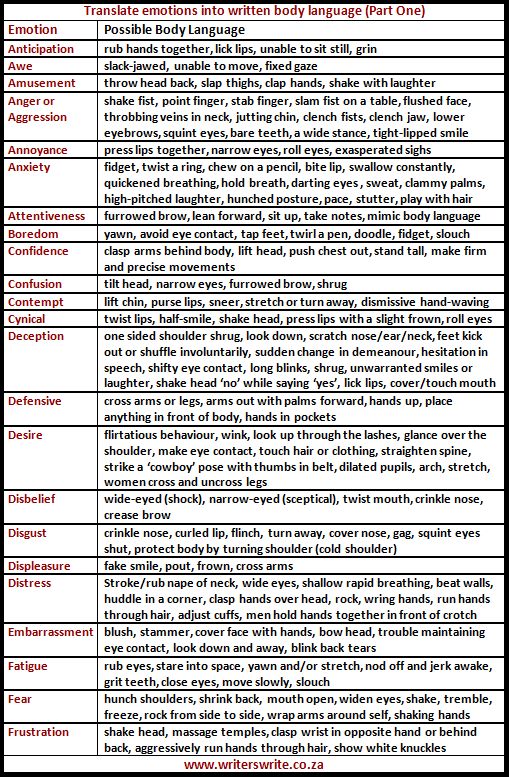 Now, some of these have been overused (I know a couple of authors with aversions to anything that has to do with eyebrows). I tend to get overly comfortable with a few favorites. My challenge to you and to myself is to branch out – use “new to you” mannerisms that add another layer to the narrative. It might even be fun to try a flash fiction piece that uses only body language for communication.

Also, you writer types should check out Jenny’s Scribble Challenge for this week. They’re a fun way to see how other writers attack a single prompt in a concise way. Plus, if your submission gets the most votes, you get a little feature on her blog!

As I sit here with narrowed eyes and my head resting in my hand, I leave you with this question: Are there places in your story that would benefit from more descriptive body language?

14 thoughts on “The Next Layer Of Dialogue: Body Language”