When I started elementary school, my school had an awesome playground. As I progressed through the grades, the playground became increasingly sucky as all the fun equipment was removed because of risk of injury to the users. Incidentally, the only severe injury I ever personally saw was caused by a dumpster lid. But I digress.

It’s not just physical equipment that is disappearing. Kids today aren’t allowed to play games that were staples of our childhoods. As you read through the activities that our kids will never experience, I hope you have a sense of nostalgia as well as a sense of dread at the pansies that our society is creating. 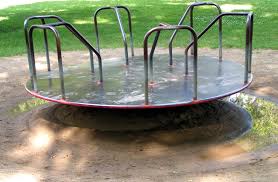 Remember this bad boy? The idea was to hold on to to a metal bar with all your might while your friends spun the contraption around with increasing speed, usually until they did a face-plant into the sand or bark mulch. Weeeee! This was one of the first things to disappear from my elementary playground.

This wasn’t so much a fault of the equipment, but of the users. Teeter-totters weren’t problems when
kids figured out how to balance their weight and therefore could move up and down for as long as they desired. The problem came when one kid decided they were done. Usually, they got off at the bottom, causing the other kid to fall and slam into the ground.Often, the dismounting kid was just not being thoughtful, but sometimes they were being an asshole. My school had a few of these awesome things, but they, too, were eliminated.

I’ve actually seen this one making a comeback. I think I can thank Napoleon Dynamite for that. Anyway, tether ball was one of those games that I don’t think anyone really knew how to play. Kids just smacked the ball around until the rope spun all the way around the pole, or until someone got smacked in the face. In either case, fun was had by all, at least for a little while.

Johnny ran across to the opposing line, hoping to break the chain of arms, but really got punched in the throat by the clenched fists. It was awesome. I knew my childhood was officially over when I told the students at the school where I worked that they couldn’t play Red Rover, and they went “what’s that?” Sigh.

By the time I reached sixth grade, all that was left of our kick-ass playground was a swing set, a slide, and a balance beam that was two inches off the ground. I think there were also some tires sticking out of the sand halfway that we could walk on. Oooh, scary. Maybe there was actually some benefit to all these risky toys and games. I don’t know anyone who got seriously injured, and I think it made us all stronger in a way. We had to conquer something that looked, and in reality probably was, dangerous. We became braver, it increased our rank in the elementary school social order, and if we were injured, we became tougher in the end. And being tougher really helped when we went after our asshole friend who jumped off the teeter-totter at the bottom.