Don’t worry, this post is still approved for general audiences. Though if you’re looking for the more adult definition, this is the interwebs. Just don’t be gone too long, because that might not help your career advancement.

This post is about writers who make it, the ones who find the magical combination of timing and the right eyes and whatever else it takes to make it – you know, the writers who get lucky.

I participate in a weekly Twitter chat called #storysocial. Last night’s topic was traditional vs. indie pub, and someone made this comment in response to a question about what we think are the biggest challenges in the publishing world:

I had to disagree a little.

To me, luck implies good fortune that outweighs the effort it takes to get it. If I go to the gas station, buy a lottery ticket, and win ten million dollars, that’s luck. Statistically, I’m more likely to get hit by a car on the way to the station than to win the jackpot, and spending two dollars on a ticket was virtually no effort on my part.

Simply put, writing and publishing a book takes more effort than that.

Yes, there are elements of a Big Writing Break that are out of our control. Some writers are better set up for success out of the gate – for example, anecdotal studies (like this one) show women are less likely to land an agent and get traditionally published than men. That’s why many women writers use initials (J.K. Rowling, anyone?).

So some of us have to work harder than others, but that doesn’t mean writing success is off the table. Let’s examine the experiences of Writers A and B, fictional wordsmiths based on the stories of real people. 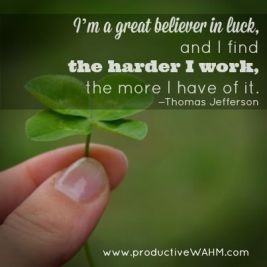 Writer A writes a masterpiece, works on perfecting it with a critique group and editor, spends hours constructing an effective query, and sends it out to agents. While she waits, she works on building her social media platform. After sixty rejections, one New York agent asks to see the full MS and eventually signs writer A. Would you say Writer A is lucky?

Writer B opts to self-publish her masterpiece. She spends her own money on an editor, works with a critique group, hires a cover designer, arranges for advance review copies to go out, and promotes the pre-order period widely across social media. On launch day she sells…twenty copies. So she re-evaluates. She learns where her audience hangs out and schedules signings there. She revises her blurb. Maybe she redoes the cover. Eventually, after some well timed posts in promotional newsletters, her book reaches #1 in two categories on Amazon and she’s making some decent money. Is Writer B lucky? 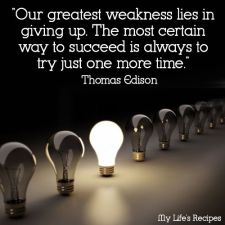 From the outside, it may look like Writers A and B are lucky. Landing an agent is hard. Hitting number one in a category is amazing. But from the outside, we don’t see all the stuff that came before the big break. Writer A had sixty rejections? Man, that’s tough. And I bet Writer B didn’t get much else done while preparing her book for public consumption.

Their success didn’t come from luck. It came from sheer tenacity.

What if Writer A had given up after fifty-five rejections? What if Writer B decided her book was a failure after only twenty sales on launch day and did nothing else with it? They might have holed up in their writer dens, bitter against those whose fortunes were better than their own.

Here’s the thing about attributing success to luck: it invalidates any hard work that contributed to the success.

I doubt there’s a successful writer out there who made it on the first book they slopped together. And even if you’ve had some success, agents won’t be beating down your door, desperate to represent the next Stephen King. You have to want it badly enough to stick with it for however long it takes to make it (whatever that means for you), making adjustments along the way if you don’t see the results you want.

Personally, I think we give luck too much credit.

33 thoughts on “Writers Can Help Themselves Get Lucky”