This will surprise some writers in my critique group, but I’ve been on the fence about writing on this topic.

I’m such a POV (point of view, in case anyone’s lost) stickler that this should be a piece of cake. I’ve had writers in the group see my crits and ask me to crit their work because 1. POV is confusing for them, and 2. POV slips jump off the screen and bite me on my face.

It seems I know a thing or two about it. 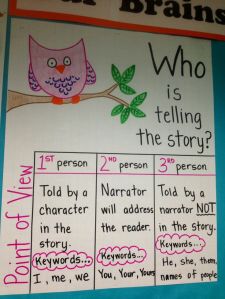 First person is when the main character is telling the story from his own perspective and is signaled by the use of the words “I”, “me”, “we”, etc. It is the most subjective POV, because we’re basically living inside this person’s head for the duration of the book. In my experience, I’ve found first person works best in the following conditions:

1. The MC is especially angsty. This is why so much YA is written in first person.

3. The story is such that being stuck in one angsty head for the duration builds tension.

Some authors write in first person perspective from multiple characters, switching perspectives at chapter breaks. The Help is a famous example. If you go this route, make sure each of your first person POVs has their own distinct voice.

This is my happy place. Third person is when the story is told around a main character, but we’re not stuffed in that character’s head so closely. Look for words like “he”, “she”, “him”, “her”, etc. Limited indicates the author is sticking with the perspective of select characters, as opposed to bouncing around to all of them (that’s omniscient, stand by for that one). It’s usually still subjective in nature, in that we know what the characters are thinking and feeling, much like first person, but we get the beautiful luxury of moving from perspective to perspective. However – this is not done randomly, which is why I added the “episodic” label up there. Usually we’re in one character’s head for a scene or chapter, and we only experience the scene through that one character for the scene’s duration. Jumping to another character’s head without a break is head hopping, and that’s bad.

This is when the reader gets to experience all heads within the story pretty much whenever the author damn well feels like we need to be in another character’s head. There are no required scene breaks. We can be with a new character for each paragraph, if the author deems such a thing necessary. Let me just say that this is hard to pull off. Readers like to be close to one or a few characters, and jumping around to countless ones can be confusing. I’m not saying it can’t be done. I’m saying proceed with caution.

A word on slips

POV slips are really easy to write. They occur when your POV character senses something they couldn’t possibly sense. They can be subtle. I’ll italicize the slip and see if you can figure out why it’s a slip.

“I’m not going on the trip,” I finally said.

I can infer that mom’s surprised, but I’m not in mom’s head so I can’t know that for sure. Easy fix: just say Mom’s mouth dropped open. Some writers will likely argue with me. That’s fine. I’m a stickler, remember?

Slips can be more obvious, too.

I waited for Julie to arrive, but she was holed up in her room listening to that awful jazz CD.

Unless Julie told me this, I can’t know it because I’m not there. Adding likely before holed is a possible fix. Or I could just say she was at her house.

And just so you know I’m in no way claiming POV perfection, allow me to offer a slip I wrote into my own work.

The kids grew impatient, and they pulled on Michelle’s arm.

Know why that’s a slip? I’ll leave you to figure it out.

Question time: In what POV do you prefer to write? Why is that your favorite?

16 thoughts on “POV: How Your Readers Experience Your Story World – So Yeah, It Matters”