It’s true! By Monday (that’s 3 days from now), my upcoming novel, Project Liberatio, will be ready for beta readers. And for the first time, I’m expanding the pool of betas to include blog readers (that’s you!).

But what does a beta reader do?

Rather than explain it in my own words, I hopped over to Dan’s blog and stole his explanation, because he did a pretty darned good job.

Well, it’s kind of a big deal. You get to read the whole book before everybody else and then tell me what you think. Also, you get to be one of the first people to post an honest review on Amazon.

I did a few posts on being a beta, so you can read more if you click HERE to learn more, but basically you’ll…

So what’s the book about?

It’s the sequel to Project Renovatio, so anyone who’s read that will have background going in, but new readers shouldn’t have trouble understanding the story (if you do, that’s good information for me to have). 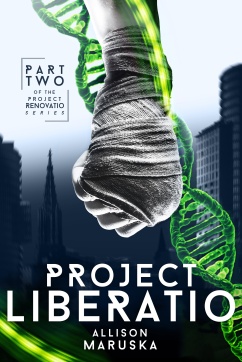 And now, for the cover and blurb!

After weeks of hiding from the radical group that plans to turn him and his siblings into an army of genetically engineered supersoldiers, Levin wants nothing more than to get back to his old life. So when he learns they have the opportunity to return home, he jumps at the chance–all they have to do is defeat the very faction that has forced them to take refuge.

Following intense training, Levin’s group pursues the faction, but his focus isn’t solely on the fight. When he sneaks away to visit his girlfriend, he unwittingly reveals himself to the enemy. Now, he must sacrifice his own plans and desires and commit himself to a new mission-or he could lose much more than his freedom.

To volunteer to be a beta reader, simply send me a message via the Contact Me page, and I’ll quickly get back to you and send you the book by Monday. You’ll have three weeks to read it and send feedback.

I greatly look forward to sharing the new book with you and hearing your thoughts about it!

11 thoughts on “Be A Beta Reader For Project Liberatio!”