Keeping up with a social media presence can be a daunting task. Especially for those new to the game, posting new and relevant content often feels like that “extra” thing that seems to have little effect and is easily forgotten. But if it’s neglected, potential readers, fellow writers, and maybe even agents and editors may forget you exist. That’s generally a bad thing when it comes to branding.

Fortunately, there are tools to make the task less daunting.

In Badredhead Media 30-day Book Marketing Challenge, Rachel Thompson discusses using post schedulers to keep engaging content front and center on your chosen platforms even when it’s not front and center of your mind. I looked at my own social media behavior and decided there was definitely room for improvement, especially in the area of posting regularly. A few weeks ago I received a notification from Facebook that my page followers hadn’t heard from me in a while.

Enter the schedulers, Hootsuite and Buffer. I’ve used Hootsuite for a few years as a way to schedule tweets and to shorten URLs back when Twitter didn’t do that for you. Buffer is new to me, but it didn’t take long to see the benefits of this tool.

Let’s break down each one. You can get to the pages directly by clicking the names.

Before I get into this, I should say I know I’m not getting everything I could out of Hootsuite, as I only use the free account. There’s an important reason you might want to upgrade, which we’ll get to later.

Hootsuite sets up your social media accounts on dashboards. 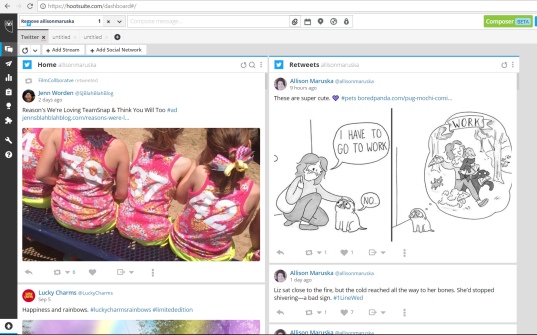 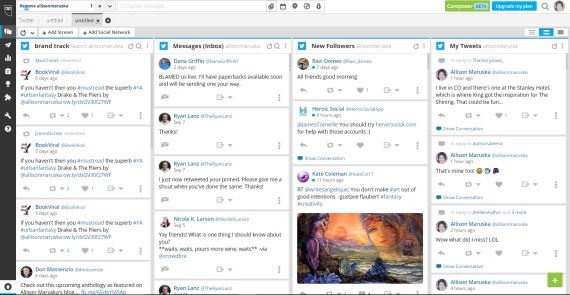 The idea is you can use your accounts directly on Hootsuite, thus saving time. Take the last screen shot, for example. I can track my brand, respond to DMs, and interact with tweeps without jumping around to different screens on Twitter. That’s a pretty sweet setup if you need it.

Seeing as I’m not talked about much and don’t get DMs I want to answer very often, I don’t really need all that. But the concept is neat.

As a scheduler, Hootsuite is a little clunky. Say I want to schedule some blog posts to appear on Twitter. 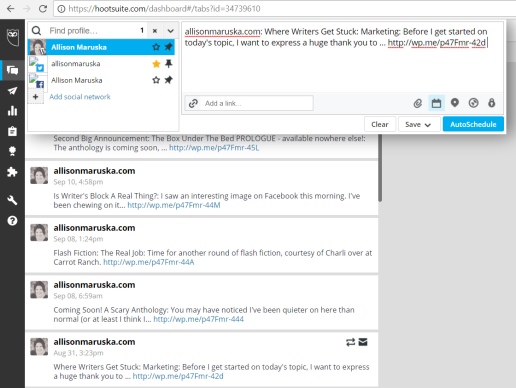 See the arrows on the bottom? That means re-post. When I click that, it fills in the box on top with the pre-constructed tweet, which as you can see, has a lot of extra junk in it. So I gotta take that out. 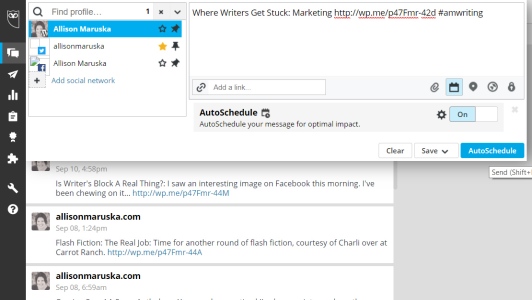 I can then decide if I want to post now or schedule it for later. You can pick your own time or use AutoSchedule. Because we’ll be comparing this to Buffer, I chose the autoschedule option and did a little digging to see what the times were.

This is what I found in the Settings wheel. 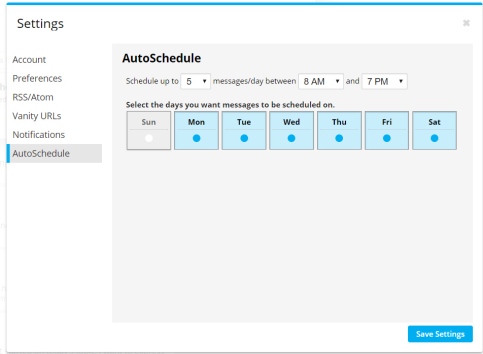 It’s not very detailed. When I clicked the publisher option, I saw this.

Apparently, 6:00 is the time the autoscheduler decided this post should be tweeted for some reason.

An option that makes scheduling on Hootsuite easier is the browser plug-in, which they call a Hootlet (I circled it in red in the following screen shot). With that, you can schedule posts directly from the site you want to share.

There are other goodies on Hootsuite that I haven’t tried, such as the ability to set up sweepstakes campaigns and work with a team. If you want to analyze the performance of your posts, though, you have to upgrade.

Let’s get to the next scheduler.

When I talked to her on Twitter, Rachel Thompson (the author of that book) said Hootsuite used to have a content curator, which would gather content from all over the interwebs for you to share. Since that’s not available anymore, she suggested UpContent to gather content. So I checked it out. 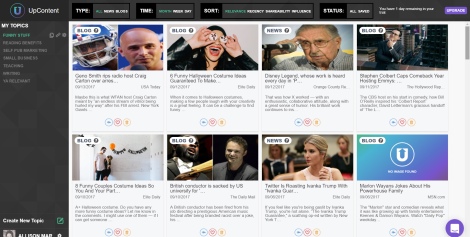 When you want to share something directly from UpContent, it takes you to Buffer, which is how I ended up there. Buffer is a straight-up post scheduler with few bells and whistles. Which is what I love about it. 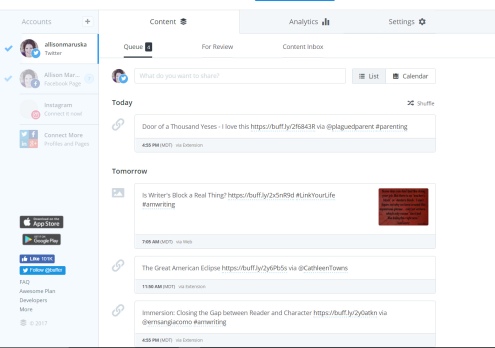 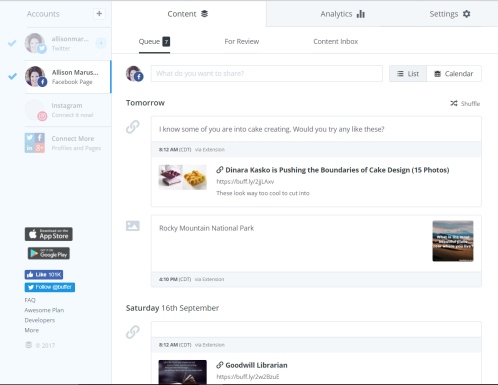 You can schedule posts directly on Buffer or using its browser plug-in (circled in red in the following pic). When you do that, it opens a sharing option for all accounts you have connected to Buffer. This is helpful for catering your message to your various audiences and scheduling posts for more than one place at a time. 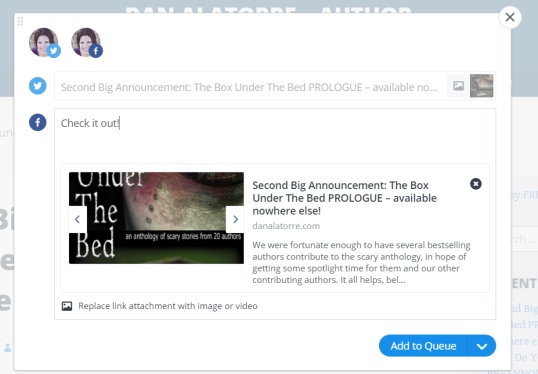 You can also change one of the posts if you don’t want to share the same content to all of your platforms. Just paste a different link into the one you want to change (you have to post something for each platform, though you can delete later in Buffer if you want). 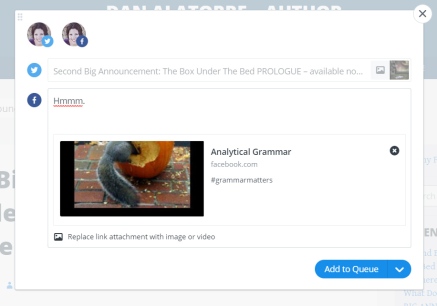 When you push the Add to Queue button, Buffer schedules your posts according to the default schedule or one you set. 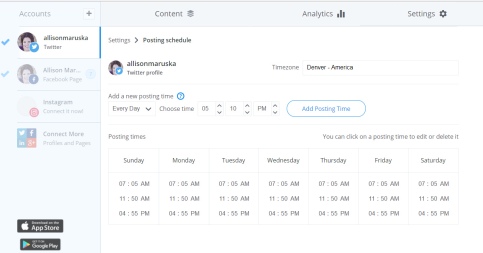 Unlike Hootsuite, you can view analytics on the free account, which is a big plus. 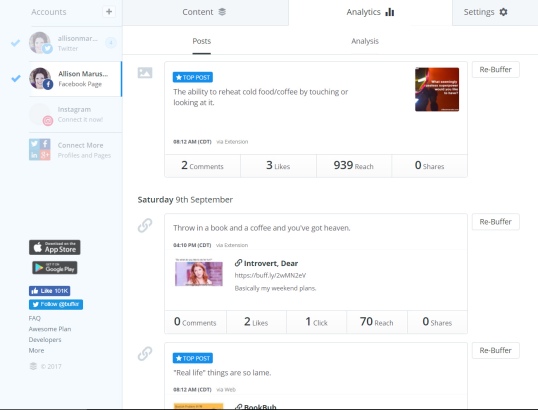 Buffer is my new favorite scheduler. As for content curation, rather than pay to continue to use UpContent, I go through my WordPress Reader and add posts I think will appeal to my followers to my queues. It takes a little time, but I can schedule posts for several days, and using my Reader has made me a better citizen of the blogosphere.

Have you used either of these tools? What are your thoughts?

13 thoughts on “Buffer vs Hootsuite: An Analysis of Content Schedulers”