Christmas Eve is one of my favorite days.

And my favorite part of Christmas Eve is the end of it, when the sun has set, the stores are closed, people are either at church or at home with family, and for a brief moment, all is calm. 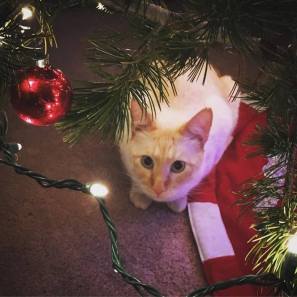 For me, that’s the spirit of the season.

We read The Night Before Christmas, the kids go to bed early, and the hubs and I watch a favorite Christmas movie. Tomorrow will be busy. Tonight, we rest and enjoy.

How do you celebrate the season? What are your family traditions?

The characters in the Project Renovatio world celebrate Christmas. Like my family, they open all their presents on Christmas morning. The youngest of the family gets up early to make sure everyone is ready to have all the fun. But this year is a little different for them. I thought I’d give you a glimpse into their day.

But first, I want to wish you all the best this season and thank you for reading and following. I wouldn’t be able to do what I do without you.

Rana glanced at her alarm clock and snuggled back into the covers. Twenty-four hours from now, she’d be on her way to the airport. A few hours after that, she’d find Dante waiting for her.

Anxious longing filled her gut. What would he say when he saw her? What would he do? He’d told her he had things he wanted to say face-to-face, but he hadn’t said anything about physical contact. She assumed he’d hug her, at least at first, but what if he had more in mind? Could she kiss him for the first time surrounded by people in an airport?

A shiver moved through her body.

“Wake up! It’s Christmas!” Dayla ran into Rana’s room and bounced on the end of her bed.

Smiling, Rana threw the covers over her head and whined. “It’s early.”

“Come on! Mom and Walt are already up.”

Rana peeked over the top of her comforter.

The aroma of fresh coffee met Rana as she and Dayla made their way downstairs. Their mother and stepdad sat at the kitchen table, overlooking the vast holiday display that had taken over the family room.

“Merry Christmas!” Dayla ran to the table and wrapped her arms around Liz’s neck.

Walt chuckled. “Are you ready to open some presents?”

“Yeah! Is Levin coming over?” Dayla bounced on her toes.

“Yeah. He came over last year.”

Rana went upstairs to get her phone and sent a text to her brother.

Are you coming over?

Several minutes passed with no reply. Was he planning to avoid his family all day? Rana and her siblings had always been close, and missing a holiday together, especially one as special as Christmas, was unheard of. At least, it was before this year.

In an effort to bury the aggravation building in her gut, she jumped around to different apps on her phone. His reply appeared the same moment she decided he must be sleeping all day. Oh, it’s Christmas, isn’t it? Yeah, I’ll be over.

Dayla grimaced and said in her most grown-up voice, “We’ll wait for him to get here before we open presents.”

Her mother choked on her coffee and laughed.

Levin tossed half a dozen presents into his car. Spending time with his family countered his plan of staying home all day and wallowing in his misery, but he figured it was a good step in his Letting-Maggie-Go plan.

Walt would want to know how counseling was going, as Levin had started seeing the counselor because of his stepdad’s example. It had taken just a few short months for Walt to transform into a productive member of his family, and Levin had assumed counseling would have the same magical effect for him. The fact that it hadn’t made Levin avoid Walt at every opportunity, as if the old man would interrogate him about his lack of progress. He never did, but Levin figured it was only a matter of time before curiosity got the better of Walt and he brought up the subject.

Halfway to their house, Levin’s phone rang. He didn’t recognize the number.

“Levin? This is Steven Craig.”

“Oh. Hi.” Levin checked the screen again—not only was the number not connected to Dr. Craig in the contact list, the area code didn’t match any place Levin had known the man to live. “What’s going on? You didn’t return my text—”

“I wanted to call to wish you and your family a Merry Christmas.”

What? “Okay. Thanks. Merry Christmas.”

After a pause, Dr. Craig cleared his throat. “I’ve been thinking about you, your sisters, and the other kids. I wish you all weren’t so spread out.”

“You worked well together. I’ll never forget that. I hope you don’t, either.”

“Okay.” Levin pulled his phone away from his ear and glared at it, as if it would offer a rational explanation for this conversation.

“You know that things could become difficult again. I know you can handle it when they do. Just remember your strengths and what you’ve learned. You have it in you to be a leader. Remember that.”

A leader? “Why did you want me to keep the names—”

Levin set the phone on the passenger seat.

Dr. Craig was often cryptic, but this was bizarre even for him. He wished the group wasn’t spread out, and that things would get difficult—what did any of that mean?

Shaking his head, Levin parked in his mother’s driveway.

With the family room full of torn paper and new gifts, Rana sat on the floor and flipped through the set of novels she’d asked for. She put the first of the series in her lap. It would be perfect for the flight out.

“When are you leaving for Arizona?” Levin rocked in the recliner.

“Tomorrow.” A huge smile took over her face.

His words didn’t surprise her. Someone in her family was sure to try talking her out of going at some point. She slid the books back into their box. “Getting big brother-y on me? You know you can trust Dante.”

“No, it’s not that.” Levin joined her on the floor. “Dr. Craig called me on the way here. He sounded weird.”

She huffed. “He sounded weird. You want me to cancel a trip I’ve been dying to go on for weeks because of weird.” Standing, she gathered her gifts from the floor.

Levin picked up a box holding her new shirt and handed it to her. “He didn’t sound like himself. He said things about how we all worked well together and that I should remember what I learned.”

“So, this is the first we hear from him in months, and that’s what he says? I think he was trying to warn us about something.”

She headed for the staircase, leaving Levin behind. “Maybe he was just checking up on you. If there was a real threat, he would have been more specific.” It was sweet of him to be concerned, but this “maybe” threat wasn’t going to derail her plans.

She stopped walking and turned around. “I’m going.”

Sighing, he approached and put his hand on her shoulder. “Fine. Just keep your eyes open for anything unusual, okay? And tell Dante about the call.”

“Okay.” She smiled, and the anxious longing returned to her stomach.

“Good. I’m happy for you.” He hugged her, smashing her gifts into her belly.

This excerpt is from Project Ancora, part three of the Project Renovatio series, scheduled for release March 1. I can’t tell you how excited I am to have the series nearly complete, and I can’t wait to share the rest of the story with you. 🙂

2 thoughts on “Wishing You The Best This Holiday Season”