Yesterday I returned to Colorado after spending five days in sunny and warm Florida, where I got to hang out with these guys: 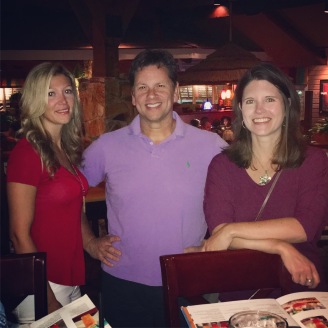 It’s the Writers Off Task With Friends crew all together in person! Or Jenny and Dan, if you’re not our viewer.

And do this thing: 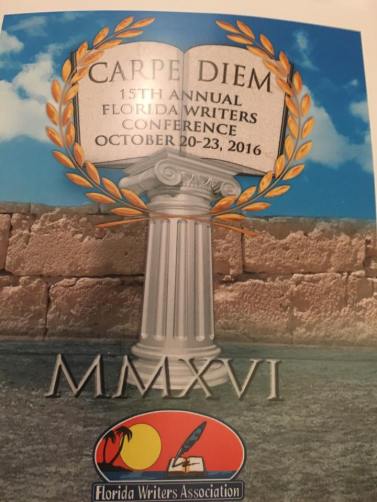 It was a lot less Roman than that cover suggests.

It was educational, and I’m not talking solely about what I picked up in the workshops. This was my second writers conference. The first was in Colorado last year, and it was interesting to see the differences between the two events. In considering both, I’ve boiled down the overall writers conference experience into three…lessons, I guess. Definitely things to keep in mind if you’re planning to attend a conference yourself.

Thing 1: Conferences are designed with a specific audience in mind.

The Colorado conference has been around for decades and is geared towards developing writers who primarily want to be traditionally published. There were genre- and even character-specific workshops meant for those who know a thing or two about writing already and want to take the next step. Even for someone like me, who is more indie-oriented, there were points that applied to where I was/am in my writing career.

The attendees at the Florida conference were…let’s say mostly retired. As in, they retired and are now taking the opportunity to write that book they’ve been thinking about. Good for them!

Consider that audience. Most haven’t been in school for a while. Many don’t have a lot of experience with computers and social media. My cohorts and I did not fit into that group (we met in an online critique group). So while most of the workshops were great for writers just starting out with the basics of writing and social media, for writers like us, it was an exercise in seeing what we do being validated.

Thing 2: There is something for everyone.

Even though many of the workshops described practices we already employ, we didn’t have to stay put if the class wasn’t beneficial. We could leave one workshop and join another if we thought it would be more appropriate. In one, I picked up some much-needed tips on developing relatable characters. Another presenter discussed overused tropes in romance stories, and while I don’t write romance outright, most of my stories include romantic elements, so it’s helpful to know what to watch out for.

Jenny found a lot of value in the pitch workshops, while Dan worked the networking side of the event. Even within our own group – and we have a lot in common – we gleaned different take-home points that were relevant to our specific goals.

Thing 3: Writers need to interact with their tribe.

We writers tend to be solitary creatures, and most of us are happy to stay that way. But in the interest of developing our craft and moving forward in our chosen careers, we have to get out there and talk to other writers. Network. Find out what works for them. Doing so can bring focus to your own goals – so know what those are going in! It can be figuring out what publication path to take, how to find an editor, how to develop a story, or how to increase sales, among a myriad of other possibilities.

The bottom line is this: even if all of the workshops were boring or beneath you or spoken in a foreign language, there is value in connecting with others. We don’t work in a central place like other professions. This is a chance to do that. Connect and learn from each other.

Also, if you can go with a couple of friends, the experience is guaranteed to be more fun.

17 thoughts on “Three Things To Know About Writers Conferences”