In the second Back to the Future movie, Marty travels to the year 2015. That is three short years from now, and I see no evidence of the futuristic wonders that are portrayed in the movie. Hoverboards? Please. Self-drying coats? Not likely. Hologram sharks? Well, after someone brought Tupac “back” via hologram, that one might actually happen.

Hoverboards would be nifty, but there are other things that I think science needs to hurry the hell up and create already.

I admittedly stole acquired this idea from the ecard at right. Okay, everyone who enjoys folding clothes, say “I do!”.

This clearly needs to happen. The closest thing I’ve seen was at a hotel where I worked for a brief period. It had a clippy thing that would hold the corner of a sheet so you could fold it. This isn’t even in the same galaxy to what I have in mind. Imagine opening your dryer, and there in the middle is a beautiful stack of folded clothes. Sigh.

This one comes from a high school friend. It is for those times when you are driving and some asshole decides to drive all assholey around you. The idea is everyone gets some number (let’s say five per year) of asshole darts to use from their cars. When someone cuts you off, flips you off, or otherwise drives in a way that makes you swear, you get to shoot one of your darts into their car. They can’t remove the darts without the help of a mechanic or body shop guy, and that’s where the next part comes in. When they get ten asshole darts, their car just dies. They might get a 10 second warning so they can get out of traffic, but that’s it. 10 darts and you’re done until you pay a mechanic to remove them.

Don’t get me wrong. I know there are times when kids cry because they need something or because they are hurt 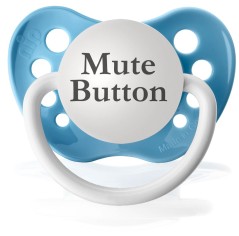 and need some parental love. That’s not what I’m talking about here. I’m talking about the incessant whiny, tantrum stage that for my kids occurred at around ages 3 or 4. If they whine – mute! Screaming tantrum? Mute! It might even come in handy when they become mouthy teenagers. It wouldn’t look like a pacifier, as the picture suggests. Maybe it would be a chip or something that literally comes with a remote. I’m laughing just thinking about it.

5. Some kind of pill to make farts smell like roses (or any fragrance of choice).

I suggest this one as the only female in a family that includes three male-type specimens. Farts happen. A lot. And they must always be hilarious. And the more horrifyingly smelly they are, they more hilarious they are. I suggest a vitamin-type supplement that one could take every morning or something, and the result is pleasant-smelling flatulence. Maybe then I wouldn’t want to run away to the Yankee Candle store whenever the fart fests begin.

Got any more ideas for future devices? Let’s hear ’em!